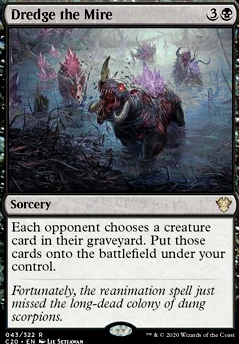 Each opponent chooses a creature card in their graveyard. Put those cards onto the battlefield under your control.

Dredge the Mire occurrence in decks from the last year

The Lord of the Rings (Bad guys) & the Hobbit
by CptFisty 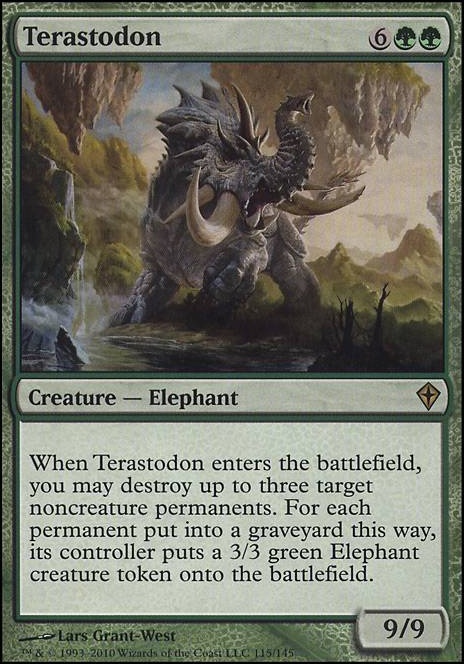 Thanks Daedalus19876, it was definitely an interesting one to build! My lack of Deluge always bothers you ;P

I didn't think about Altar of the Brood, that's a good one! Dredge the Mire is sweet too!

Overall this seems like a good start! The lack of Toxic Deluge bothers me (it's certainly better than Coercive Portal), and I might try playing some targeted graveyard hate. I know that sounds counterintuitive, but it lets you remove uninteresting creatures from graveyard to Tariel's ability only hits the best options. You could also try running mill effects such as Altar of the Brood and Mesmeric Orb to fill up graveyards quickly. Necromancy is another copy of Animate Dead, and the new Dredge the Mire might be a good inclusion!

_Putrefax: While I agree that I do struggle with Rest in Peace, I think that's just an unavoidable part of playing mono-black. For the moment, though, it's a small enough problem that I'm not willing to devote two slots to a different combo, where one of the two slots in that combo (Mindcrank) actively hurts me (by giving my opponents a GY to play with).

I actually have tinkered with the counter lands, but they've never quite... worked right here. They make it so that, essentially, I am forced to proliferate each turn, which is rarely the right move. Actually, the one land I HAVE considered is City of Shadows, but that seems perhaps a little janky even for me.

And yeah, I have a bunch of stuff to add from Ikoria and C20! The highest priorities are Bastion of Remembrance, Deadly Rollick, Netherborn Altar, and Nesting Grounds. I may also run Daring Fiendbonder and Dredge the Mire, but I'm more doubtful on these.