Enchant creature or planeswalker you control

When enchanted permanent is put into the graveryard or is exiled, return that card to the battlefield under your control.

Kaya's Ghostform occurrence in decks from the last year 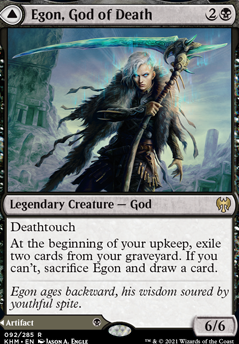 How I Met Your Mother (Necrophilia Edition)
by Checky

Kuroi Ame: A Lesson in Futility
by Ainiv +1 Kaya's Ghostform back in to go infinite w/ Sun Titan and a sac outlet. +1 Goblin Bombardment that he owns.

Don't really like Skyline Despot and Terror of the Peaks here either....but I'll leave that to your preference.

-1 Swamp, -1 Plains. +1 Caves of Koilos , +1 Battlefield Forge for cheap mana-fixing. And maybe the appropriate Zendikar/Kaldheim Pathway lands if you want to go a bit higher in budget.

At the risk of too many more enchantments Hidden Stockpile could provide both token generation and a sacrifice outlet.

Depending on how much you prefer turn-after-turn enchantment based draw like Phyrexian Arena you could instead use burst draw, like Night's Whisper or Village Rites ....1 mana to turn your creature into a draw spell in response to a boardwipe or block? Can be really effective.

And alternatively, with this amount of boardwipes and low CMC removal, you might just want to stick to the big value beat-sticks like the Despot and Terror as wincons rather than Aristocrats.

Cool list! This kind of deck is for sure Mana-intensive so having a lot of land and fixing is good, but you could pretty easily cut a few lands without issue. I'd suggest the guildgates and Temple of the False God since they're slower. Basic lands are surprisingly effective and easy to cheat out with the creatures and such you're already running.

Also, some extra protection for your commander could be helpful, since it's a key part of the strategy. Something like Swiftfoot Boots , Gift of Immortality , or Kaya's Ghostform would work, though something re-usable like the boots would be preferable considering the amount of boardwipes you have available.

Kaya's Ghostform , Altar of Dementia and Lotus Petal generate infinite mill for everyone. You could also mill yourself and win with Jace or oracle if you have the extra mana. Or if you use LED instead of lotus petal you also generate infinite mana. Those 3 cards are a cheap combo in terms of mana with 3 mana total, all cards should be affordable and in case you have an Intuition they form a nice package to search up. Also theyâre pretty useful on their own outside of the combo. I use that combo in my Muldrotha and it gets a lot of work done

Yesterday on Does Prince of Thralls have â¦

I know Prince doesn't have standard replacement effect wording, but I'm not sure why else the creature wouldn't have returned.

what happen how to trigger work

Oh, I also wanted to mention that Magus of the Will with Kaya's Ghostform brings him back instead of exiling him, and this will let you play any of your big X spells that somehow made it into the graveyard from a sad counterspell or which were milled.

Fertilid is good with the counters but is too slow whenever I run it. I think you should run something like Blossoming Defense over Kaya's Ghostform, Kaya's Ghostform will make it drop all the enchantments that are on it. Mask of Avacyn can be another card in a similar role. The Ozolith seems so good in this deck that I would think about adding some equipment in and maybe a few other artifacts to try and get Inventors' Fair to work. Sarulf, Realm Eater may be a board wipe that will synergize, though a bit finnicky. Obsessive Skinner seems too difficult to get working early with little pay off if it does, Evolutionary Escalation may fit well into that deck, making counters, and friends, early and often. Mighty Emergence can probably do some work as the game goes on, Necropolis Regent seems like the perfect curve topper, Retribution of the Ancients might be a good removal engine. I do think that trample is the most important keyword early, so Ring of Kalonia is a good choice, Dragon Fangs or Vorrac Battlehorns may be good additions as well.

Counterspells, redirects, Lightning Greaves, Swiftfoot Boots, any of the swords of x and y, Hammer of Nazahn, Gift of Doom, Kaya's Ghostform, any number of white cantrips, etc...