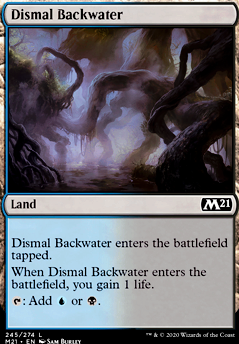 When Dismal Backwater enters the battlefield, you gain 1 life.

Back on topic, I feel that you may be missing an opportunity with saying it doesn't go into Chainer, Nightmare Adept

. Without knowing how your decks are built I'd say it would want one more than Roon for sure.

I'm still a bit taken aback by what I see as "average farting around level" is an 8 on these power scales. Now that I look at it more it isn't even that what I play fits neatly into an 8. It is more building philosophy of 8, card choices of 6, seriousness of 4. This is why I don't like these scales. They leave no room for the guy Diabolic Tutoring for a Dismal Backwater to set off Blood/Bond. Whatever level people consider that to be, I still don't think that Lithoform Engine will see much play at or above.

A little more land tech: Cinder barrens could be swapped out for Bloodfell Caves I would switch both bloodfell/Cinder and the copy of Swiftwater Cliffs for copies of Temple of Mystery and Temple of Malice.

Iâll put up more in a few hours, or, barring that, tomorrow. Itâll just take me a bit longer to find synergy pieces.

Tranquil Cove and replacing it with Sea of Clouds

Sejiri Refuge and replacing it with Hallowed Fountain

Dismal Backwater and replacing it with Morphic Pool

Yeah, I'll just start on the manabase for now. It needs a lot of work. Gateway Plaza is absolute trash -- cut it. Crumbling Necropolis enters tapped but gives you the colors you need, and it's cheap. 3 color with mana costs as restrictive as Nicol Bolas, Dragon-God and Nicol Bolas are a serious pain in the ass with a budget -- to be honest I would just cut all four copies. If you want to keep them, you basically need to run fetchlands like Polluted Delta, shocks like Watery Grave, and filter lands like Sunken Ruins to get that .

I see you already have Sunken Hollow, the other battle land in your colors, Smoldering Marsh, shouldn't be too expensive. You can also try the cycle of reveal lands, Choked Estuary and Foreboding Ruins. You can also try the temple cycle, Temple of Deceit, Temple of Malice, and Temple of Epiphany. If you have to, you can also resort to the "enters tapped you gain 1 life" dual lands like Dismal Backwater.