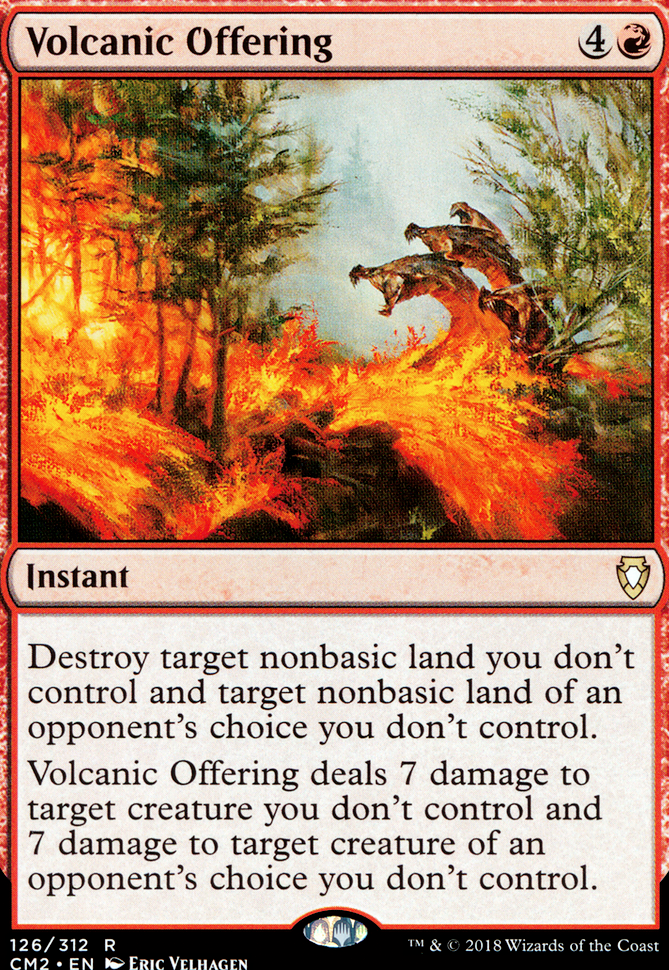 Blim: It's just a prank, bro
by Coward_Token 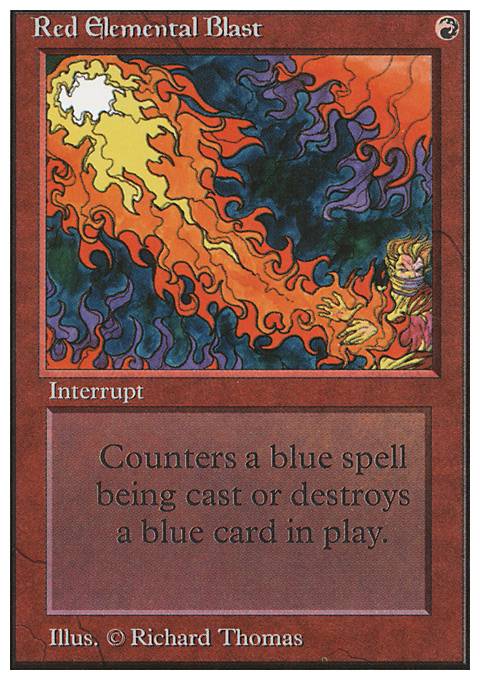 gavriel1136 I forgot about Volcanic Offering what a badass spell. Soulfire Eruption is ridiculously bomb too. If only it didn't have 3 red pips so you could be more comfortable with token heavy decks

Volcanic Offering , is a massive overperformer for my Mizzix of the Izmagnus deck. Granted. I can cast it for R in that deck, but every time I've played it, it's been devastating. With the slightest politicking, you can remove the two biggest threats on the board and cut the legs out from a ramp player.

Do it right, and they won't even blame you, since you only did half the targeting!

If you're looking for removal, aside from your X-board wipes, Song of the Dryads is cool because it can screw with mono red and black by targetting their commanders due to their lack of enchantment removal. Do note it says permanent so you can target opposing coffers, cradle, nykthos, field of the dead, etc... Bonus points if you strip mine it in response to their enchantment removal.

Chain Reaction / Blasphemous Act also work, but I take it you wouldn't want a Non-X wipe.

Decimate - While requiring all targets, is a 4 for 1 that might be worth looking into

While probably not what you're looking for, Volcanic Offering is a fun often overlooked card. Instant speed (usually) 4 for 1 removal with a hint of politics. This works best in metas with powerful non basics.

Duplicant > Steel Helkite? Steel usually works best in mono red or black that can't target artifacts and enchantments. It only costs 1 more mana for an immediate effect rather than requiring combat damage and additional mana.

Chandra, Torch of Defiance > Domri Rade? Doesn't require a creature, acts as ramp, draw, and a wincon all in 1. Or does the extra mana bother you given your lower curve?

No Reap the Past ? Or does the random part bother you?

Lastly a power card such as Jeska's Will might be worth considering as well.

I'm looking forward to your response for each suggestion :)

The deck is in very good shape. Just a few personal preference changes from me. Im not a big fan of Chrome Mox outside of cedh because the card advantage is really bad. A few other things I would cut are Sigarda's aid since it has weird timing issues, and combat celebrant since it is fragile in combat and I find that Aurelia Waves and Godo take care of all of my extra combat needs. I would add an Ardenn because its ridiculous with equipment, I would also add a dowsing dagger because beside being good on its own its also good with winter orb. I would look to add a little bit more interaction, either a Blasphemous Act or a Volcanic Offering . I also run with 2 fogs in the form of Comeuppance and Teferi's Protection to keep myself from incoming attacks. Lastly, if you are playing in a setting where you feel that winter orb is necessary you may want to look at some hate bears like Hushbringer , Archon of Emeria , and Drannith Magistrate and Aven Mindcensor they are very good for keeping your opponents off balance, and if they have to shoot a hate bear that means they arent shooting something more important. Oh I would also add Tome of Legends since you already have manifold key.

SMELY_ZAJKO More mill helps accelerate the deck and gives you more lines of play sooner, but it definitely can operate without it. If the mill doesn't sit well with you, use those as more flex slots to add in your cards you like!

Dawn of the Dead, Mirror March, and Psychic Vortex are all absolutely usable in this deck. My playgroup generally plays pretty quick decks, so the higher CMC of those cards pushed me away from them. I would give those cards a try against your play group and then adjust to match the speed of the games they play.

Usually Obeka, Brute Chronologist isn't considered a threat unless you have combo pieces on the board, so you will generally get the chance to tap her quite a bit. This is especially true the more you use her ability to help our your opponents; they may then actually want you to have her in play. Make sure they know you are open to making deals and helping them out with her ability, and you should have no problem! None the less, something I found that helps with strategizing while playing is to go about my turns assuming I won't be able to use Obeka's ability for myself unless I have protection of some sort readily available. It is because of that I would be careful with Psychic Vortex; play it assuming you will have to discarding your hand and sac a land each turn and know you won't have Obeka available as a political piece as long as it is in play. If you are okay with that, absolutely run it! I chose to stay away from it because of this though.

Dreadbore or Volcanic Offering are definitely good choices for removal. You can either swap out any of the cards under the Removal category with them or if you want them as additional removal, replace anything in the Clone category with them. Talk to and make sure the land destruction in Volcanic Offering is cool with your play group though; land destruction is usually strongly disliked and/or looked down upon, but each play group is different. Talk to them, and you can't go wrong!

DriftingEpyon Thanks, you are awesome! Is the reanimate effect really so rapid that more mill is needed? What do you think about Dawn of the Dead, Mirror March, Psychic Vortex, Dreadbore or Volcanic Offering? And how often are you able to tap Obeka please? I'm wondering if it's every turn (so Psychic Vortex or Dawn of the Dead makes sense) once your group knows the deck, or if it's more like a rare thing.

Fallerup I appreciate the feedback. I think I will look to update the manabase with Commander Legends. I was optimistic about the cycling lands but they're clearly lower power cards that I will be looking to replace. Volcanic Offering has been a person favorite of mine a couple years back so I'll definitely try that out as well as Blasphemous Act.

Anunnaki I'm glad you like the deck and good luck pulling it out in your meta, it's a blast the play. The Managorger Hydra package is not core to the deck and was more of an deckbuilding when I started building the deck. There are surely better cards to play and if you're worried about getting hated out in your meta I fully support your plan to replace them with other cards.