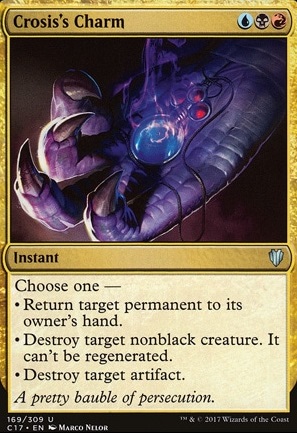 Crosis's Charm occurrence in decks from the last year 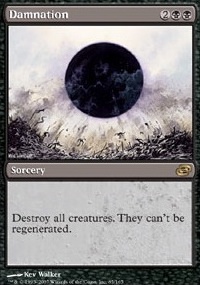 SynergyBuild on Why Utter End, and cards ...

What are some of the most popular instants and sorceries according to EDHREC?

What do these have in common? Well, they are bad removal (or countermagic... or both), all of which are overcosted.

Why? Well, these all fall under different categories, however, I will go from the easiest to explain to the hardest.

Cancel is too expensive, countermagic should be one or two mana so you don't have to clearly have a sign up that you are holding countermagic. This is really cheap, and I can't compete with that, but Mana Leak or Counterspell would be better in the spot tenfold.

Murder is the same, as creature removal, but at least can be cast on endsteps. The issue lies with that many spells cost less, like even Doom Blade , which I also don't like, or do more, like Terminate , another I also don't like.

Disdainful Stroke is way too specific, so many spells costs 3 or less you may hold up the mana multiple turn cycles in a row without a target, wasting mana and a card. Too expensive considering cards like Swan Song , Spell Pierce , Red Elemental Blast , Flusterstorm , etc. exist. Even at a low price Mana Leak , Negate , etc. do work.

Doom Blade and Go for the Throat are the same, except they still have application when used on an endstep. Too expensive despite that, as Swords to Plowshares , Path to Exile , Dismember , Fatal Push , etc. exist if you can spend the money, while on a budget Murderous Cut , Tragic Slip , etc. do a lot.

Hero's Downfall is just a worse Ruinous Path , another Murder with slight upside. All of these are bad. Go with any of the options in Murder or Go for the Throat / Doom Blade .

Grixis Charm and Crosis's Charm cost Grixis, 3 mana, and are just too hard to cast to be worth the half Vindicate esque effect they do. They bounce anything, kill some things, and one has a minor benefit like 2 extra power. It just doesn't serve consistent enough for removal. 3 mana in Grixis is too much altogether.

Bant Charm is nearly the same, with the counter upside. It has a Dispel attached to it, making it the least bad, but for 3 specific mana, it is simply too much to hold up easily.

Dreadbore is a sorcery, costs two specific mana, and doesn't hit many permanents. I'd rather a Terminate , though I dislike both.

Terminate only hits so many permanents, and costs 2 mana. I'd replace it with most of the cards mentioned at Go for the Throat / Doom Blade above.

Sylvan Reclamation five mana is too much unless it is a sweeper. This has utility, hitting two permanents, and is an instant with landcycling, but the mana cost needed to be 1 lower to be efficient. Nature's Claim , Return to Dust , Disenchant , Natural State , Naturalize , etc. are all better.

Krosan Grip is sweet against some decks, don't get me wrong, however, is too specific and too high mana cost to be argued better than a Beast Within or Nature's Claim or Natural State .

Utter End is too high mana cost to be worth it. It is a worse Anguished Unmaking , another bad card, and is just too much to warrant using it over a card like Chain of Vapor , Swords to Plowshares , Nature's Claim , Dismember , or any of the other 1 cmc removal spells.

(BTW this was an April Fools, all of these cards can be good or bad in specific metagames or decks.)

You might consider some cheap replacements: Vivid Creek , Vivid Marsh , Vivid Crag and Vivid Grove instead of Dismal Backwater , Jungle Hollow , Rugged Highlands and Swiftwater Cliffs for extra mana-fixing (which is needed in a 4-color deck). Also: Llanowar Wastes , Yavimaya Coast and Shivan Reef are cheap untapped lands. // You might consider Farseek , Sakura-Tribe Elder , Explosive Vegetation and Circuitous Route for further ramp. Farseek can grab Sunken Hollow , Smoldering Marsh or Cinder Glade , while Circuitous Route can search for Simic Guildgate , Izzet Guildgate and Golgari Guildgate . // You might run Fact or Fiction , Steam Augury and Ancient Excavation for early card draw and graveyard filler for delve cards, like Murderous Cut , Dig Through Time and Tasigur, the Golden Fang (they all got reprinted). Brainstorm and Painful Truths are also great draw spells. // Izzet Charm , Crosis's Charm and Sultai Charm are really versatile removing threats. They could replace Scour from Existence . // Zendikar Resurgent is a mana-doubler, which can fuel big Comet Storm , Blue Sun's Zenith , Pull from Tomorrow , Exsanguinate and Curse of the Swine . // Since you are playing expensive spells, Deep-Sea Kraken , Combustible Gearhulk , Avatar of Fury , Avatar of Woe , Primeval Protector , Sunbird's Invocation , Metallurgic Summonings are great ways to deal a lot of damage.

A nice, little primer with a decent outline of an underappreciated commander. I've popped by a few times and I have to say you've found a bunch of awesome cards for Mairsil that I'm excited to give a go in my Mairsil deck. When I eventually get around to making it...

If I were to recommend anything, it'd be to replace some cage-fodder with some instant-speed interaction and sweet, sweet draw/cycling; like: Crosis's Charm, Terminate, Cyclonic Rift, Fact or Fiction, Steam Augury, Cathartic Reunion and Phyrexian Arena. Just to make your deck more consistent and less dependent on creatures, yaknow?

Other than that, I think this list is "Definately worth the to be featured" and I look forward to seeing your update to the primer!

what Soren841 said is correct. grixis as a color combination is severely lacking in enchantment removal as selesnya colors are where that is a mechanic. the best and perhaps only answers to enchantments are Counterspell s and bounce spells.

Cyclonic Rift is a must have in this deck, it hard Answers almost everything and works stupdily well with wheels,

other answers you could run not seen here are Annul , Negate , Countersquall , Boomerang , Repeal , Void Snare , Disperse , Blink of an Eye , Cryptic Command , Into the Roil , Crosis's Charm , and Grixis Charm