Until end of turn, whenever a player casts an instant or sorcery spell, that player copies it and may choose new targets for the copy. 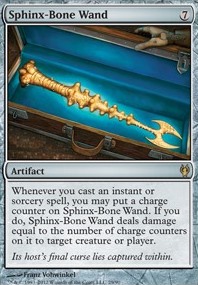 Hey Elasar99 thank you for this alternative.

I changed the deck several times and wasnt able to change the list.

So my build is currently going for infinite turns and some Bonus Round shinanigans and the obvious Kiki Jiki line for the win. But I could easily change some cards for Comet Storm Scepter Combo.

yes Bonus Round is a really cool card. and it is fun to play too. but i don't think that it fits that well in this deck. that's because with Bonus Round you want value spells such as Spelltwine or like Cauldron Dance

Hey, forgot to check this out earlier. I think you've done a great job getting a budget version going! Would Bonus Round be of any interest to you in this? I don't know red very well, but it sounds interesting.

Personally I would recommend dropping a Grapeshot for a Brain Freeze, as you want to be able to turn your Merchant Scrolls into a wincon when going off, additionally Cunning Wish is a huge help, you can toss a sideboard copy of a lot of tutor targets, and get additional copies of them, Bonus Round can also be huge if you want an insane engine that works well if you go for a red splash.

Now for the Past in Flames build, Intuition and Gifts Ungiven and a bunch more support the build well, and can use a stand-alone Life from the Loam to get back a tutored Lotus Field as well as having side-ways synergy with the deck's fetchlands and Lonely Sandbars.

I've run Bonus Round but was not impressed by it. Same thing with Past in Flames, although I am considering bring the latter back.

I think there are lots of spells that benefit from copying. For example, you can also blow things up with REB. As for when to use Tormenting Voice effects, you have to play with the deck and learn how to do it.