Sulfur Falls enters the battlefield tapped unless you control an Island or a Mountain.

Sulfur Falls occurrence in decks from the last year 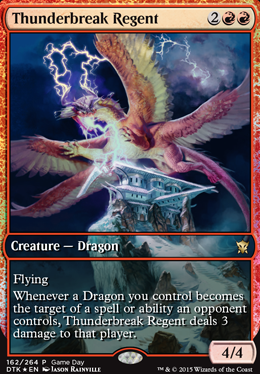 Lilmammal perhaps if they splashed in a few Sulfur Falls. You can pick them up for between 2.50-3.50 right now from TCGplayer. With a playset of those you could run, 6 Islands, 4 Sulfur Falls, and 35 mountains. This would help address the manabase issue while still remaining within the wanted budget of 20$.

Hey, nice version of Ur-Dragon except the Gates.

I don't think the Gates strategy is worth it unless you're playing a main dedicated strategy of getting Gates and getting more out of them then just lands for Maze's End. What the Gates are doing here is making the manabase terribly slow for not enough benefit. Golos is a good card without Gates.

My advice for a budget manabase is replace the Gates with some Tri lands (Savage Lands), Battle lands (Cinder Glade) and the less expensive Check lands (Sulfur Falls). Add Exotic Orchard in place of Maze and add more basic lands. Of course this would be for a budget manabase. If you can spend more than there's many other better manabase configurations to use.

Temur Ascendancy and Elemental Bond are very good repeatable draw with Dragons because they also trigger when Dragon tokens are created such as from the Sarkhans, Utvara, Lathliss, Dragonmaster Outcast, Skyline Despot. Wasitora will trigger Bond each time a 3/3 Cat Dragon is created. When creature tokens are created they enter the battlefield (ETB). Ascendancy is another haste enabler. Whenever you put a Dragon onto the battlefield it ETB such as with Ur-Dragon, Teneb, the Harvester, Bladewing, Quicksilver Amulet triggers Ascendancy and Bond to draw.

Dark Ritual, Seething Song and Mana Geyser are three of the better rituals in Magic especially Geyser in multiplayer Commander since it looks at all your opponents tapped lands which can equal a lot of red mana on your turn.

Thanks for the comment! I'm running Spirebluff Canal because it's what I have, but Sulfur Falls is honestly a better alternative. I'll change the decklist and work on getting them. Reckless Charge is a good alternative to Sure Strike, so I'll swap that in, too.