Whenever another Zombie you control dies, target opponent loses 1 life.

Diregraf Captain occurrence in decks from the last year

Gisa and Geralf EDH
by IanWalsh 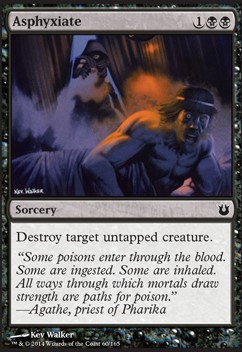 Power in the sac

So the biggest thing I see if lack of things to sacrifice... Namely: tokens, because you don't want to be tossing your real creatures into Ye old Graveyard. So let's try to find some token making things for you....

This should create more tokens for sacrificing and also add some more benefits when things do die, and they will die. I would also recommend Altar of Dementia as an additional sac outlet... Izzet Signet can be dropped for this addition.

For infinite Goblins.. Get ANY sacrifice outlet on the board, I don't care which one, just do it, and get Krenko, Mob Boss out also and ready to be tapped. Equip Thornbite Staff to Krenko... Tap him to make some goblins (maybe just one or two, that's okay). Now you can sacrifice that Goblin Token, which dies and triggers the second ability of Thornbite Staff (Whenever a creatures dies, Untap equipped creature).. now you can Tap Krenko again making more goblins... and hey.. sacrifice a token again to create more goblins... triggering the Staff AGAIN! As long as there is some other death triggers on the board, you should be able to drain the table and/or pump Thraximundar to an unreasonable size and kill someone.

Thank you for coming to my TedTalk.

Ferocious Feast of The Undead

Brutal, simple, and effective. I love it. My only suggestion might be to consider Diregraf Captain over maybe Dread Wanderer. His cmc is higher, but the other effects he brings to the table are too good to pass up. Just a thought.

Hey, I don't want you to feel like you're being ganged up in the comments of your deck. I am and Arcaia also are simply trying to get you to better understand card quality. When you have such a high budget then card quality becomes an excellent way to improve your deck because you don't have to worry as much about the cost of a deck which lets you play the best cards and cut the subpar ones.

First let me start by saying I've been wrong saying to cut Havengul Lich. Not for reasons you're describing, but because it's a combo piece. Overall for five mana Havengul is not a good card, but with Zombies it's a combo with Rooftop Storm + Phyrexian Altar/Ashnod's Altar to cast all the Zombies on your turn from all graveyards. Add any other card that cares about casting spells, creatures dying or creatures ETB for lots of value. Use Sidisi, Undead Vizier with this combo to tutor for Gravecrawler and then Diregraf Captain as the win condition. Or simply loop cast/sac Vengeful Dead/Gray Merchant of Asphodel as a win condition.

Arcaia explained Havengul, activated abilities have a colon ( : ) in the text. The ability on the card has a cost first, then a : and last an effect ( [Cost]: [Effect] ). Sometimes the cost requires tapping the creature which will show a on the left side of the colon. If there isn't a colon then it's not an activated ability.

Arcaia left out one thing when explaining Havengul, you can't use an activated ability for a creature for only one mana without support. Instead it's one mana to activate Havengul, then you have to pay additional mana to cast the creature. Overall Havengul for a five drop requires a lot of additional mana to get anything meaningful from it which lowers the quality of the card a lot. That's why Havengul has good interaction with Rooftop Storm and Zombies since Rooftop takes away needing to pay mana to cast the Zombie after you activate Havengul.

With Rooftop and Havengul you can indeed for one mana cast a Zombie from a graveyard. And each Zombie you cast for the turn from a graveyard only costs one mana. This lets you cast as many Zombies in graveyards equal to as much mana you have available. Havengul is good with Rooftop, but only with Rooftop, that makes it less good as a five drop overall, less quality than some other fives drops that are also in the deck.

Good job winning with Gravecrawler, it's most likely the best Zombie in Magic. This will be my last comment here.