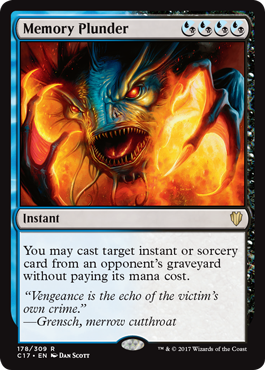 You may play target instant or sorcery card in an opponent's graveyard without paying its mana cost.

Memory Plunder occurrence in decks from the last year

Ancestral Vision something to do early and cards draw.

Pact of Negation to allow me to push through my combo

Exhume? I get my cards going, but everyone else gets something fun so this may better is it was Zombify or Profane Command

Memory Plunder with all the incidental mill I'm sure someone will have something I want to cast.