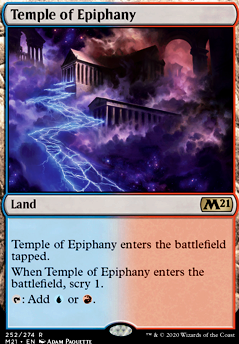 Temple of Epiphany occurrence in decks from the last year

The Locus God
by mmtg101 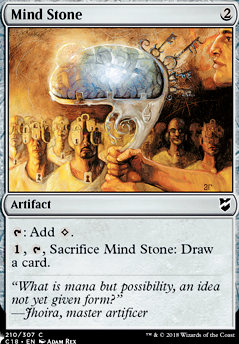 As far as mechanized production goes it will work that way, so you can copy treasures or even other artifacts in your deck. I understand if you want to focus more on the flavor though.

So at a glance I would say that Diabolic Tutor, Brainstorm, and Preordain are the most out of place. The tutor is very expensive and there isn't anything I am seeing that is really worth paying 4 extra mana to have in your hand. For the most part the cantrips just replace themselves and while they may moderately fix your draw, they don't give card advantage like some of the other cards in your deck. I tend to only put them in decks that synergize in some way with them. For the last one I would say pick your least favorite card, none stick out as particularly bad in the deck.

For the lands, I think you could afford to cut some basics and that may help fix mana. Some non-basics you could run that won't cost too much on their own are Temple of Deceit, Temple of Malice, Temple of Epiphany, Shivan Reef, Underground River, Grixis Panorama, Path of Ancestry, Thriving Bluff, Thriving Isle, Thriving Moor. I don't know if those thriving lands are available quite yet though. Of course the less basics you run the more consistent your colors will be, in your case I would shoot for around 10-12 total.

First of all, that description...a true work of art. ;) I can already see how the combos will run strong in this deck. Your land base looks pretty good, especially the inclusion of Nivix, Aerie of the Firemind. That is a nice mana base, but it seems a bit conflicting with the fact that you'll be comboing off...so... You may want to swap out Temple of Epiphany for a faster land, but if you need the scry, I totally understand. You also may want to cut down the number of lands you have by 1-2 since your curve isn't too high.

As for your sideboard... there doesn't appear to be one. I'd recommend adding a couple of counterspells to that, maybe some more draw spells, depending on how you want the deck to function with those. Otherwise, this is a really great (and annoying) deck, that--I won't lie--I'm scared to play against. :b Good luck with it!!

Ok, the main problem I see here is the mana base. There are a lot of budget lands that will help you cast what you want in the deck, especially because our commander is Niv-Mizzet, the Firemind. Izzet Guildgate, Swiftwater Cliffs, Temple of Epiphany, Gateway Plaza, Rupture Spire, Terramorphic Expanse are just a few examples. +1

This is a great deck! But hold on buddy, that is a LOT is basics. I would cut some of those for some of these: