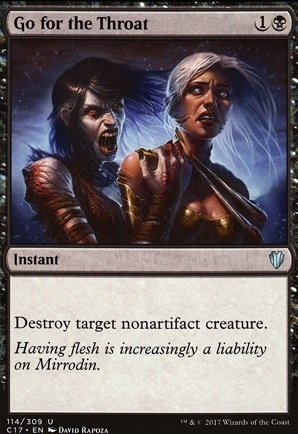 Go for the Throat occurrence in decks from the last year

Pain and Punishment
by Jeys86

Damia Sends Her Regards
by HydraDragon

Go for the Throat Discussion

I agree that you could definitely use some hand disruption in here - if Thoughtseize is out of your budget you could look at Inquisition of Kozilek or Collective Brutality. The later of which pairs extremely well with Bloodghast.
Doom Blade is a little weak for modern - maybe consider stronger removal like Fatal Push or Murderous Cut. Go for the Throat or Victim of Night are also options, though not as strong in my opinion. Hero's Downfall and Murderous Rider fit the bill too.

Banehound can be swapped for Vampire of the Dire Moon as long as you don't mind giving up haste. Terror is outclassed by Go for the Throat. Have you considered Vampire Nocturnus?

On devotion...Nykthos, Shrine to Nyx could be a powerful land for you, if it's within budget. While not a Vampire, Gray Merchant of Asphodel has some potential here, rewarding your mono-black nature and supporting your life-gain theme.

These are just a couple of suggestions I have. Most of them should be fairly cheap to pick up! Other than that, this looks really fun to play. You could also get a bit more cruel with your sacrifice subtheme and add Dictate of Erebos or Grave Pact. Food for thought...

Heartless Summoning is going to disable several of your creatures from staying alive, unfortunately. Given that your mana curve mostly stops at 5, I doubt you need the cost reduction it gives you. Even just looking at your commander, it turns Drana into just a 1/2 at first, which really isn't that intimidating. While it does allow you to play 5-mana creatures on turn 3 (and don't get me wrong, this IS powerful), I worry that your 1/1 creatures would be dead weight in your hand.

@sam171z, I've never built in golgari colors or green more specifically so my advice might not be the best.

Based on your deck you might find Arbor Elf helpful.

There's a lack of removal in this deck and you might find these cards helpful: Dismember , Go for the Throat , Sinister Concoction , Thrashing Brontodon , Sylvok Replica , Force of Vigor .

Skullclamp is a really good card draw source especially if you pair it with Bloodghast and fetch-lands. Dark Tutelage is another option if you don't mind the life loss. Mirri's Guile seems to also be pretty strong with shuffle effects like fetch-lands.

Pattern of Rebirth seems like a really strong tutor effect for you.

Melira, Sylvok Outcast might be a good inclusion as you can win the game with her + Devoted Druid + Walking Ballista / Bloodrite Invoker .

Hope this helps you.

Appreciate the input either way. That is honestly the main reason I started using tappedout. So my decks get some input from other players outside my LGS.

FYI, i live in the East Coast(New York) so it is almost 3:30am here, either way, no problem :D

Cloud Key You haven't been the first to suggest this(one of my friends thinks it should be in(IN ADDITION, to helm of awakening)). I'll play around with it once i pickup one for K'rrik. I see the potential in it. When I first saw K'rrik spoiled, the idea of the deck was much different. It seemed silly since K'rrik pays for Black and I wouldn't want that many artifacts... However, now that the deck/general idea for K'rrik is more colorless than you'd think, I might put in Voltaic Key and other artifacts(maybe Scroll Rack , but honestly didn't test too good since I didn't end of using it too much...that one colorless would always go towards something else.) I honestly am going to give it a shot. I should mention, the above deck isn't my current build. There are a few cards I've been changing in and out to test out.

Mind Twist seems lackluster IMO, if I do run rings, maybe?(even then it seems not needed). Also, making someone discard their hand seems a waste when i'd rather just win the game. If it was Instant speed, i'd maybe consider it. However it is not. I doubt i'd ever run it to be honest.

Syphon Mind Totally get it. I don't even think the cost is that bad. It was a thought... but that was it. After playing the deck for so long, drawing cards usually isn't a big problem...I do have a bunch of card draw already. Such as Greed ( or other examples: Erebos, necropotence, arguel's blood fast etc.) Plus Villis, sensei's and other cards(cantrips(in this deck, Nihil Spellbomb is basically a cantrip/free card but whenever I need it...but usually I save it to stop a combo or to help enable my own combo.

Murderous Rider was a thought aswell. It honestly seems like a slightly worse Vraska's Contempt... Mainly because of the Exile(eldrazi go bye bye!). Hero's Downfall was in the very first draft of this deck. Now Rider is better IMO since it shuffles in/doubles as a creature. It honestly may go in Go for the Throat 's place.

First, I don't know if Drown in the Loch is the best card for this deck. You aren't milling your opponent except for vantress, and you really want to be proactive in the early turns so you don't have the mana to keep drowned up. Other removal spells may be better, like Go for the Throat , Fatal Push , or extra copies of what you've got already.

Second, Invisible Stalker seems too cute to me. Without varolz stalker is just dealing 1 point of damage a turn, which seems really weak. If you had something like Kitesail Freebooter or Bitterblossom that was a good card on its own that had evasion, varolz could work with that, but stalker just felt like a bad card whenever I drew it on the limited testing I did.

Finally, I would switch out the Liliana for oko, but that may be personal preference/bias. I feel like Oko is better against tron and aggro and may be worse in the attrition mirror, but not by a huge margin. However, I haven't played with the deck a ton and you may find one works a lot better than the other.