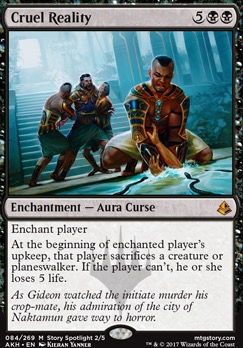 At the beginning of enchanted player's upkeep, that player sacrifices a creature or a planeswalker. If the player can't, he or she loses 5 life.

Cruel Reality occurrence in decks from the last year 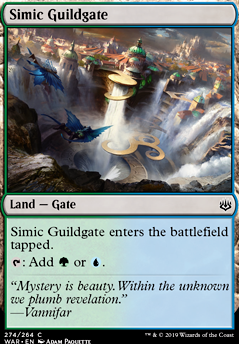 Unfortunately Cruel Reality is out of standard. So you will have to find a replacement. Not too sure where to start with advice I cant really find what kind of deck you are wanting!

Doom Whisperer is a bomb Nightmare. Plague Mare is on theme. Could even go with Nightmare

Oh and for my previous post Cruel Reality for Bitterheart Witch .

StopShot You're right, I had it confused with Cruel Reality . That's the mandatory one. That only means that Mogis, God of Slaughter is only arguably better.

Yes, you make a good case that Torment of Scarabs is the superior choice if the opponent doesn't have Leyline of Sanctity , Nature's Claim , Knight of Autumn or Tireless Tracker , and I agree.

Or if you want to be crazy, add Cruel Reality and attach it to yourself