Cruel Ultimatum occurrence in decks from the last year 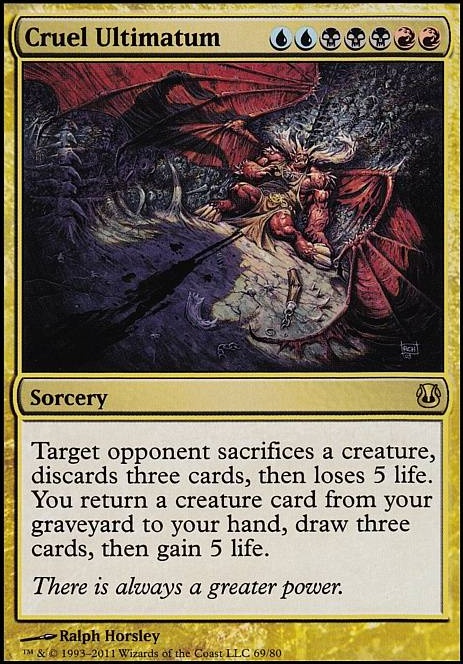 Clash of the Titans
by DemonDragonJ

Icbrgr on SHOWCASE YOUR PLAYMATS

Sweet thread. I have the Alara Cruel Ultimatum artwork playmat.

dbpunk, I would like to see all of the original five ultimatums reprinted, since only Cruel Ultimatum and Titanic Ultimatum have been reprinted, before.

The red/white/blue ultimatum, splendid ultimatum, is very nice, but, again, I cannot make any room for it in my red/white/blue deck, which is very unfortunate, and, while I could put it in my five-colored deck, I feel that Cruel Ultimatum is superior in the majority of situations, so I shall keep that card in that deck.

U should add Cruel Ultimatum

I think what Barbola meant when he asked how you were ever able to cast Cruel Ultimatum is because your mana base doesn't support it super well. You can't afford Field of Ruin, especially not without Urborg, Tomb of Yawgmoth. If you're want land destruction, you're best bet is probably a few copies of Fulminator Mage. In addition, you run kind of weird counts of basic lands. I would think you'd want at least 3 Swamps, so you can Ultimatum through a Blood Moon. You might also be able to benefit from a few filter lands like Graven Cairns and their ilk with the mana requirements of this deck, and some Reflecting Pools wouldn't be a bad idea either. I'm not really an expert on this archetype, so you can take all this with a grain of salt, but that's what I think the original comment was getting at.

Mortlocke My land base is fine for me, i am not going to spend money on land, i will add though spells that get me land.

Cruel Ultimatum I already cut that card from my deck since it was not performing well when i was playing the deck, (the only reason is still on this decklist is because i haven't had the time to update my tappedout)

Return from Extinction was always in the 99 from the begining.

How is this site not structured the same way? Although the hubs are not separated in any way (colors, archetypes, etc.), these "themes" are there.

There are 5 cards that realistically do something when you cycle a card. All of them have the text "when you cycle or discard a card". Thus, just use the discard hub.

Bounce theme has nothing to do with bounce - Yuriko, Niv-Mizzet and Golos are the top bounce commanders. The cards are generic enters-the-battlefield cards. So, a more correct hub would be "Enters the Battlefield", but that is so generic it means next to nothing. Perhaps "Flicker" or "Blink" would be most appropriate, but certainly not "Bounce".

Card Draw is equally generic. If your deck has a few cantrip cards, is it a Card Draw deck? Or if your deck features 4 Overwhelming Intellect, is it a Card Draw deck? If an EDH deck of yours uses card draw, it is likely either a group hug deck or a group slug deck. Maybe with Thassa's Oracle and Jace, Wielder of Mysteries, a new deck hub could be made to reflect decking yourself as a win condition.

Other sites may have generic, nonsensical categories. However, hubs tend to be more evocative of the archetypes they represent. Eg. Cruel Control is a control deck featuring Cruel Ultimatum.

TLDR: You have to be able to clearly define a new hub and how it differs from existing ones.