For each creature target player controls, put a token onto the battlefield that's a copy of that creature.

Clone Legion occurrence in decks from the last year

Wizards of Waverly Place
by bmcconnell11 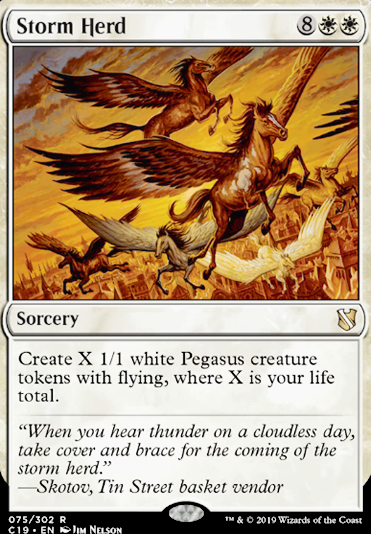 Hi! Sultai_Sir here. I love this deck! Here are some suggestions:

Displace, Ghostly Flicker, etc: You're running a bunch of clones, and if you add in a blink subtheme, you can copy utility creatures in the early game and then blink them back as Elesh Norns and Void Winnowers.

Clone Legion: From a purely Vorthos standpoint, this card seems like the biggest flavor win you could ask for. From a playing standpoint, copying a board of big bois just feels so good.

Snuff Out, Pongify, etc: You're really low on removal. this would help your deck get rid of problem cards that you can't deal with

I hope this advice helps, and as always, happy tapping!

In my kess deck (which I unfortunately haven't uploaded yet), my main wincon is casting a giant Torment of Hailfire, possibly copied a couple times. I've got multiple ritual cards (Pyretic Ritual, Seething Song) to produce the Mana, with a Past in Flames to recast and almost double the amount. Having out Thousand-Year Storm makes the Mana produced increase significantly and you get multiple copies of torment, and I can usually take out all of my opponents with a Hailfire on X=50+. However, sometimes just casting it for X=6 or 10 is enough to set your opponents back just to gain the advantage and use something else to win. Hope this helps give you some ideas!

Personally I don't like cards like Insurrection or Clone Legion because they cost a lot and I have never really benefited from using them. They're awesome cards and I wish they worked more often but I usually don't see a huge payoff. Also, I would take out Fabricate because in your deck there aren't any artifacts really worth searching up. Unless you're struggling for mana?

Thank you! I have adjusted the list a little by choosing cheaper (in terms of mana costs) mana ramp and adding some extra turns/phases. Out: Clone Legion, Dovin's Veto, Possibility Storm, Razia's Purification, and Urza's Ruinous Blast. I will have the more expensive options in mind but do not add them for now since I would like to keep this a budget version. Grateful for more advice!

Okay, so I looked up a ton of devices and techniques and I think I settled on Bathos; "An abrupt transition in style from the exalted to the commonplace, producing a ludicrous effect. While often unintended, bathos may be used deliberately to produce a humorous effect."

When Bathos, King of Jests enters the battlefield, destroy all other creatures. You discard your hand.

Pay all but 1 life, : For each creature in target graveyard, make a token copy of it. Put them all onto the battlefield. They gain haste.

From Damnation to Clone Legion, essentially. Massive 180, and Rakdos is not known for such a huge power play. The fact he has lifelink is completely negated by you paying all but 1 life, too. Lol