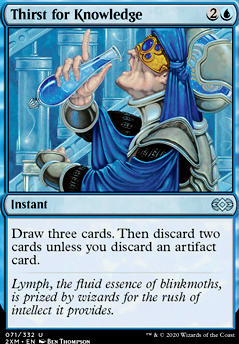 Draw three cards. Then discard two cards unless you discard an artifact card.

Thirst for Knowledge occurrence in decks from the last year

Not necessarily a competitive guy, but it feels like Thirst for Knowledge is gonna be way better than Mazemind Tome. Not to throw your whole "heretic" thing but, yeah.

I was thinking a sort of Reanimator style deck. Using Tron lands as a backup to cheat our big guys into play, and Thirst for Knowledge and Shriekhorn or something to fill our yard. Then we can use Trash and Footsteps as solid 3-mana reanimation to get a lot of value.

Intended for Modern/Casual FNM (not too competitive playgroup)

With Modern Horizons Legalizing Fact or Fiction I have been trying to build around it and Im having trouble.

Im currently brewing in Mono- Artifacts with Buried Ruin/Academy Ruins for accessing the graveyard.... mainly because I dont have any Snapcaster Mage.

Sword of the Meek with Myrs like Myr Retriever seem kinda neat with Thirst for Knowledge in the mix... also have been tinkering with Throne of Empires + Scepter of Empires + Crown of Empires.

Another direction ive looked into was with Skaab Ruinator/Misthollow Griffin with Laboratory Maniac.

Can anyone give me a decklist/shell and or other ideas for using FoF without Snapcaster Mage... I seem to be stuck.