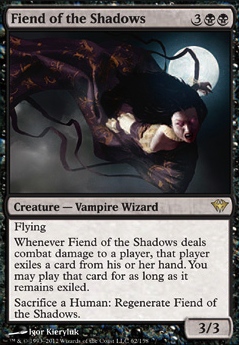 Fiend of the Shadows

Whenever Fiend of the Shadows deals combat damage to a player, that player exiles a card from his or her hand. You may play that card for as long as it remains exiled.

Sacrifice a Human: Regenerate Fiend of the Shadows

Fiend of the Shadows occurrence in decks from the last year 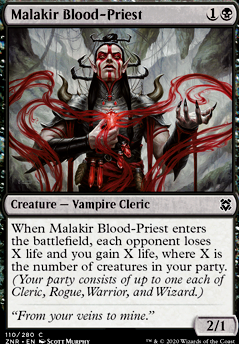 Fiend of the Shadows Discussion

Well, which way are you trying to build it? Mardeu vampire aggro? Because if so, you can add some sweet vampire anthem effects Luke a Bloodline Keeper  Flip flip or very fun effects like a Dark Impostor or you can even do some janky stuff like Fiend of the Shadows. Mardeu is very good at that.

Of course, it's all fun and games until someone gets rid of your fun stuff. But these are my suggestions.

I'm doing this from my phone, so please pardon any parsing errors.

A few things jump out at me immediately when skimming your list. One: You're not running nearly enough dudes to really capitalize on Edgar's abilities. Two: Your Black count is dangerously low.

Edgar's token ability procs with each vampire you cast, so you'll want to add in a substantial number more critters to ensure that your average draw value is maxed. His secondary ability of growing his squad also pushes this incentive even further. I'd be aiming to have close to 50 blood-suckers running around in your deck somewhere to truly keep the warmachine rolling.

The second point centers mostly around the card Vampire Nocturnus. The card is an animal, and absolutely worth building around. Yes, he isn't a legend so you won't have him every game, but with even a moderate field he can pack a potent punch. To earn this reward though requires you warping your card pool a bit to make certain that he reaches his formidable potential consistently. If there's a card or effect that you run that doesn't have a black symbol, try looking for a substitute card that might be close enough and does contain a black casting cost. Currently, 63 of the 99 cards in your deck are whiffs, so he's online just over once every three turns.

Blood Artist is a good card, and while it synergizes with Edgar's tokens as a pseudo Goblin Bombardment, I believe that he's better in an Olivia Voldaren-style deck that utilizes sac outlets more freely and effectively. Don't feel bad to run him, but the roster spot could be spent on something else.

Similarly, Bloodthrone Vampire is better in Olivia as well, though I approve of keeping some sac-outlets in the list. I'd suggest Viscera Seer as an alternate, as scry is typically superior to a buff when pitching creatures (usually in response to a board clear).

Falkenrath Gorger, Olivia, Mobilized for War, Stromkirk Condemned, and Stensia Masquerade: I've lumped these all together, as they mostly play along the same lines.

The Gorger is just a Savannah Lions in a cape enough of the time that I don't believe he merits inclusion. He improves some if you really work to get a madness theme going, but I think the dropoff in overall card quality to meet that goal isn't worth it. If you're hellbent on running him, then I'd possibly look at Sire Of Insanity and Rix Maadi, Dungeon Palace to bolster the rest of the discard outlets. Also, you just don't have enough vampires in the deck to take advantage of the free madness reliably anyways.

Olivia, Mobilized for War is pretty mediocre when not paired with Falkenrath Gorger or Oversold Cemetery. Your general already has haste, and there aren't many other vampires that I'd consider powerful enough with haste to discard for. Maybe Necropolis Regent or the specter-style vampires. Her ability to make creatures into vamps is irrelevant in your deck, and the +1/+1 bonus isn't anything too exciting. I'd cut her for something else.

Stromkirk Condemned: pretty much everything I said about Olivia applies here, though he at least is better with the tokens that Edgar makes.

Stensia Masquerade: it's neat that this has madness and the effects aren't terrible, but the enchantment suffers from not being black, and by being largely outclassed by cards like Cathars' Crusade. At the end of the day, the counters from this are too slow to make the cut.

Speaking of slow, playing Guul Draz Assassin is just asking for sadness. Level Up is one of the most feel-bad mechanics when things go wrong. Finally investing enough in your guy, only to have him Swords'ed in response is quite deflating.

Mathas, Fiend Seeker is too group-huggy for my tastes. Assuming that you play multiplayer, letting two or more opponents draw while you draw one is card disadvantage. View the table as one large, cohesive enemy, and not several smaller ones.

Mirri the Cursed is sweet, but overall not very strong. Most opponents won't block unless they can kill her. Running some additonal sabateur effects (other than Necropolis Regent and Rakish Heir) such as Larceny or Pain Magnification would help, but still probably not enough. That said, she is a cat vampire, so that's worth something.

Shadow Alley Denizen is pretty small-game. Intimidate isn't particularly strong with multicolor creatures, and even on the monoblack ones it's still not worth running. A good number of your monsters already fly, which is a better form of evasion.

Stromkirk Noble and Vampire Lacerator are just too low impact to run. They don't do anything besides attack, and topdecking one of them in the late game is nauseatingly painful. The noble suffers from being non-black as well.

Cathartic Reunion and Tormenting Voice would likely be better as actual draw spells than rummaging spells. I know they work with madness and the Cemetery, but I like things that net you cards a lot more. If you wanted, Kheru Mind-Eater and Fiend of the Shadows are tribal means of getting ahead on cards, and both black (even if they aren't great cards otherwise).

Cover of Darkness: fear is better than intimidate, but this still isn't impactful enough to run.

Necropotence is one of the most busted cards ever printed in Magic, and in Commander is a complete trap. The downsides are too steep in a multiplayer format, and only a handful of decks are set up to wield it properly. Look elsewhere for advantage. Look at your mana base and the casting cost while you're at it too.

I don't see the reason for running Expedition Map- is there an interaction I missed?

Boros Charm, Teferi's Protection, and Rootborn Defenses: These cards are all reasonable, but may be superfluous. One of Edgar's strengths is being able to churn out an army quickly, and doesn't even need to be in play to do so. It gives you a small hedge against Wrath effects; nobody at the table should be able to recover as well as you do. The rhetoric against non-black cards applies here as well. You know your meta better, so it might be right to play them, but if you really need the protection then Eldrazi Monument or Avacyn, Angel of Hope might do the job better.

Swords to Plowshares is the single greatest spot-removal spell in the format, so I'm never going to tell someone that it's wrong to play it. However, it might not be the "most right" to play it here either. It being white is a powerful strike against it, and revealing it to your opponents doesn't feel great either. You're sitting on 14 pieces of removal at the moment, which leans on the high end. Again, it could be a good meta call, but even if that number is what you want, perhaps some upgrades could be found. A black instant perhaps, such as Terminate or Silence the Believers; Vindicate as another means to deal with enchantments; or vampires that kill: Shauku, Endbringer, Vish Kal, Blood Arbiter, Dark Impostor, or Olivia Voldaren count. So would Butcher of Malakir in some circumstances, Gatekeeper of Malakir in others, and Kalitas, Bloodchief of Ghet. There are a lot of vampires that kill things dead, so maybe start there for your removal, and cut the Swords and Path to Exile.

I like mana rocks as much as the next man, but your curve is fairly low, and their colorless identity is less than stellar. Perhaps trim down to the best five, and go from there?

On the subject of mana, your mana base needs an overhaul. I know this is like the Magic version of being told to eat your vegetables, but it's so true: if you're going to spend money anywhere in your deck, start with the lands. I understand ABUs (Badlands etc) aren't in everyone's budget, but at least pick up the fetch lands (e.g. Marsh Flats) and the filters (Graven Cairns). You probably don't need any Red/White duals, but the ones that produce black will prove invaluable. If you discover that you hate paying vampires or something like that, you'll always be able to play the lands in a different deck. They aren't flashy, but they are the most important part of Commander.

Well, that's about all I have for you at first blush. If you want a list to cross-examine, I've been playing vampires since Worldwake and converted my Olivia list into Edgar when he was first spoiled. Here's the link if you'd like: http://tappedout.net/mtg-decks/formerly-olivia/

Feel free to send me an ask if you have any questions, I usually respond within a week. God bless, and good luck out there. McDeity.

Edgar Markov and the vein drainers