Other permanents you control have indestructible.

Avacyn, Angel of Hope occurrence in decks from the last year 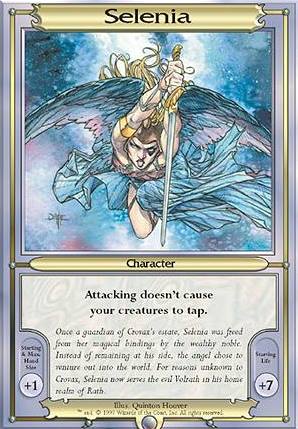 Joe_Ken_ True Conviction was already in there. The other two are good options, but Urza's Incubator has quite the prize tag. If I decide this deck is worth a lot of money, I'd rather buy the Avacyn, Angel of Hope. I believe the Semblance Anvil sets me two far back. The additional card it costs me to play is rather bad in a mono-white deck, where card draw is hard to come by. Thank you for your suggestions never the less.

You could grab Novablast Wurm and Avacyn, Angel of Hope, and keep board wiping.

You could grab Archetype of Imagination and Craterhoof Behemoth and swing for a bunch unblocked.

You could grab Leveler and Laboratory Maniac. And if you play that combo play Fractured Identity and give all your opponents a Leveler for the win.

You could grab Deadeye Navigator and Acidic Slime southbound them together and blink the fuck out of the slime.

There is so many combos that I dont know. Just do some research.

Derevi, Queen of the Hated

Difficult to say without knowing your meta because you are stax heavy. I'll rabble off some thoughts:

You have a few things happening. The only downfall with having Avacyn, Angel of Hope as your commander is that she is very expensive to get out and once you do, she is immediatly exiled and now cost even more. Here is the take I went with the angels. http://tappedout.net/mtg-decks/angelic-baptism-1/

alter, for an awesome flavor win if you do equip it to Avacyn, Angel of Hope