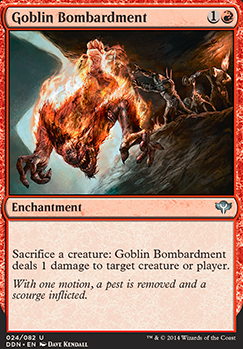 Wonderful deck! We would recommend adding Goblin Bombardment. This will make opponents who cast removal think twice before they do. Especially effective to deter wipes. Also fun to use after you have made use of the tokens created with Firecat Blitz/Tempt with Vengeance.

First of all you want some untappers like Seedborn Muse or Samut, Voice of Dissent to make more than 1 token each turn. Then some sac outlets like Goblin Bombardment and Ashnod's Altar to sacrifice you tokens whenever you want to get your dinos on the field and do dmg or get mana. If you add an eldrazi Titan to reshuffle your grave and 3 more cards you get the said infinite combos.

The Wings of War