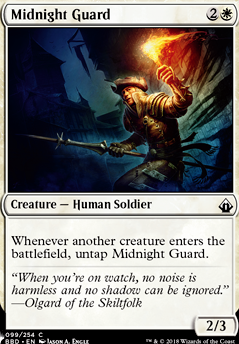 Whenever another creature enters the battlefield, untap Midnight Guard.

Anyways- had to get that off my chest somehow. Great build +1.

Awesome deck! Rhys is so fun to play and can get out of control in a hurry! Maybe a few things to consider as well, I've found Champion of Lambholt and Odric, Master Tactician to be extremely useful, making your army unblockable which is great if there's no trample out yet. Also Presence of Gond goes infinite with Midnight Guard for even more token mayhem! Great build! Here's my personal Rhys deck if you're interested: 0-60 in 3.5! (Rhys tokens)

Looks like you've a great start! I love Rhys! A few cards I would recommend are: Odric, Master Tactician who essentially makes your creatures unblockable. Marwyn, the Nurturer thrives in this deck as a solid mana dork, she could replace Llanowar elves since you're more than likely to cast Rhys on turn 1. Beastmaster Ascension works wonders, and Presence of Gond makes infinite tokens with Midnight Guard. Here's what I've done with Rhys if you're interested: 0-60 in 3.5! (Rhys tokens)

Hop in! We're going for a ride!

Artifact Creature is not a creature type, it is the card type. Coat of Arms checks the subtype of creatures i.e. Goblin, Human, Goat etc.

This deck leans more towards fun than competitive but if you draw into some of the more synergistic cards it can definitely hold it's own at the table. If you throw in some tutors and/or counter spells it would be more consistent and more competitive. I just found Midnight Guard. He might find a slot in my deck. He's potentially able to crew twice.

Well, Presence of Gond might do the trick, but it's not funny enough. If anyone can find a way to turn Midnight Guard into a land, then Squirrel Nest means we can have infinite squirrels and then the opponent will concede in laughter at your squirrels.