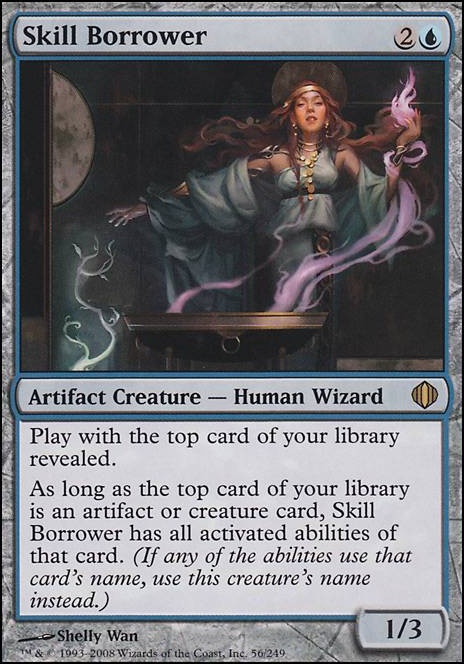 As long as the top card of your library is an artifact or creature card, Skill Borrower has all activated abilities of that card. (If any of the abilities use that card's name, use this creature's name instead.)

Stealing my OWN creatures' abilities
by sircreepalot2

Mairsil, The Pretender
by golde923

Stealing my OWN creatures' abilities
by sircreepalot2

Could splash for Skill Borrower and Set Adrift (or similar cards) in case you wanted to push the combo aspect.

LiquidGaming yep you definitely play my type of decks. Right now I'm still trying to put some finishing touches on a Modern Protean Hulk list I've been working on. I also just finished making a Skill Borrower combo list which seems legitimately good The Gob Kabob... breaking things that shouldn't be broken, lol. I've always had an interest in Legacy Delver, but can't find anyone to play some Legacy with at my LGS. And yes I play a TON of EDH. Since you seem to like my type of decks I would recommend you take a look at Kruphix, God of Horizons control combos, at first this card seems SO CHILL, but whenever I walk into my LGS to play some EDH... Player on my left: "we need to kill John first", Next Player: "we already know that", Player on my right: " Goblin Guide for turn, John I'll attack you". It's funny since it's actually come to the point of them making decks just to deal with Kruphix, God of Horizons .

I could be wrong about how much some of the things I'm am going to list may effect your deck, but these are my thoughts on your list.

1) Cut the FETCHLANDS. Yes this seems like a bad idea at first, but as a three color deck with so much card draw in it already they don't provide much help with mana fixing. Okay, but then you say they thin the deck. Yeah they do, but they hurt all of your bottom deck manipulation making all of your Serum Visions , Opt , and Sleight of Hand even more mediocre than they already are.

BTW, I recently finished building a Skill Borrower combo deck for modern if you wouldn't mind would you take a look at it and let me know what you think of it? The Gob Kabob

For that type of deck, I think you need to separate the deck into themes. For example:

Since your wincon is life loss through revealing cards, here are some more helpers to get there faster

Thanks for the upvote JKRice !

Necrotic Ooze sure is a strong candidate for this deck! I think I'll have to squeeze at least one into it.

Too bad it doesn't benefit from: 3x Conundrum Sphinx, 3x Sage of Epityr and 4x Skill Borrower. I also have an idea that this deck should not be hurt too badly by sideboard gravehate... But it's definently something I need to sit down with a stout and think about!