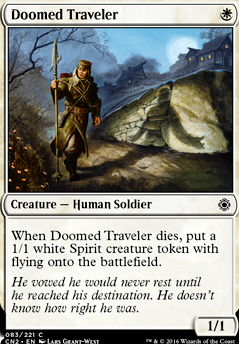 When Doomed Traveler is put into the graveyard from the battlefield, create a 1/1 white Spirit creature token with flying.

Death and Taxes
by Kamakaze_9

One man's death...
by chrismuller21

I would recommend Blood Artist and more Cartel Aristocrats and some creatures like Doomed Traveler.

I came from your forum post. In modern, tokens decks are generally on the slow side, which is why you see most BW Tokens lists playing Inquisition and Thoughtseize. Unlike what your impression of tokens seems to be, they are not usually the aggressor, but rather are a fairly defensive deck that wins with value (card advantage gained through token board presence). Thus, you generally want all your token-making cards to produce more than 1 token per card, and you don't need a token-making one-drop; I wouldn't play Doomed Traveler in a tokens deck, even if you have a few sacrifice shenanigans. I don't consider the 2 Ghost Councils to be enough in that respect.

If you really wanted to make this deck more competitively viable, you should cut the Doomed Travelers, Selfless Spirits, and Ghost Councils for hand disruption/removal. If you don't want that, I always like to play Triplicate Spirits in tokens lists. As far as cards that work with Teysa Karlov, I can't really think of anything besides the typical aristocrats (Blood Artist) that could fit into a Modern Tokens deck.

Funkydiscogod, mmh.. so in the end I wasn't wrong switching Teysa Karlov for Ghost Council of Orzhova. I knew about Promise of Bunrei, that's actually what made me change her.

Her giving lifelink and vigilance to all the tokens was pretty good though. It's a shame that her first effect it's hard to synergize with using spirit tokens.

At this point, if I use Spirit Bonds and keep Ghost Council of Orzhova, I could keep the Doomed Traveler since I can sacrifice him with the council, spawning another token, and possibly trigger Promise of Bunrei.

I'm building a BW spirits deck based on tokens, and I want to keep it BW.

I've got two problems though:

1) I can't find a good drop-1 that synergize well with tokens and spirits other than Doomed Traveler, which didn't do a good job by far. The deck should be pretty fast and aggressive, so I guess a drop-1 is required, correct me if I'm wrong. 2) I decided to replace card:Teys Karlov with Ghost Council of Orzhova because her first effect is never used with the other cards and because council's effect is good to sacrifice card:Doom Traveler and trigger Promise of Bunrei. Moreover, council's a spirit so I can sacrifice him too for Devouring Greed which is a secondary finisher in case the game stalls. Problem is: ghost council didn't do a good job too. I actually like Teysa more, but the fact that I'm not going to use her first effect bothers me. So, in the end, the best thing would something to replace card:Doom traveler that could also trigger Teysa Karlov.