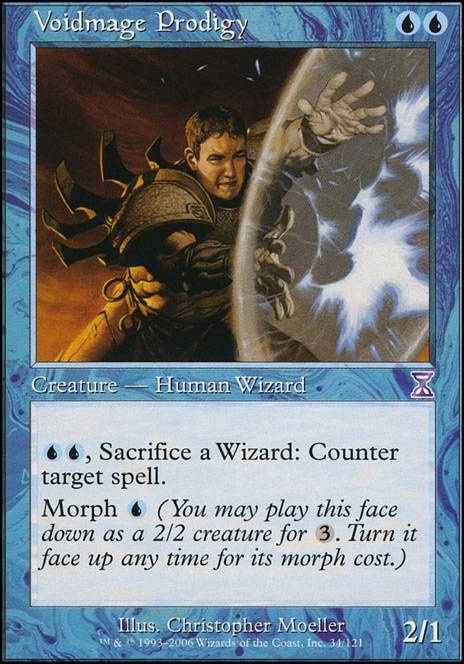 Morph ((You may cast this card face down as a 2/2 creature for . Turn it face up any time for its morph cost)

Voidmage Prodigy occurrence in decks from the last year

Fun with morph
by Xithon 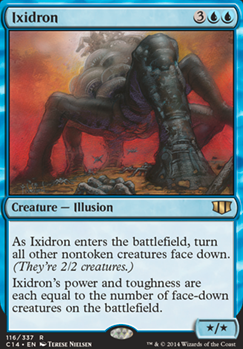 Thank you! Yeah Sygg is very fun to build around. As far as lands count, I've never really been in need of more, and I never want to see more than three in my opening hand. The engine runs on 2 colored mana sources, and after the first few turns (once I've played around the opponent's opening salvos) the added card draw provides the additional mana. I haven't ever used black drain spells in the 6 or so years I've been running this deck. They just seem slow compare to the strategy I've always employed - 1 CMC creature with P2, and then either Sygg turn 2 or a 2 CMC P3 beater, depending on the tempo situation. Sovereign's Bite is on-curve but if I'm tapping for 2 whole mana I'd rather a permanent that I can repeatedly get Sygg triggers off.

However! Loyal Subordinate looks like it could be an absolute rockstar here. What to slot out for it? Probably Voidmage Prodigy right?

The deck plays as an Aristocrats style deck, with the goal being to create a controlling presence on the board via continually using effects like Grave Pact , and by recurring creatures like Plaguecrafter , Voidmage Prodigy , Nicol Bolas, the Ravager  Flip, and etc. From there you will typically win via combat damage, though by making small adjustments to this particular list it is also easily viable to win via combo if you include Goblin Bombardment , since you can then loop Mikaeus, the Unhallowed and Glen Elendra Archmage for infinite damage.

Voidmage Prodigy could help we have a decent amount of wizards