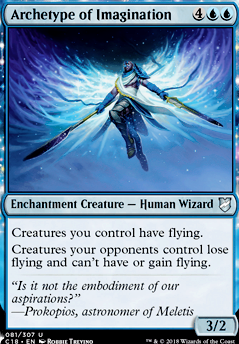 Creatures your opponents control lose flying and can't have or gain flying.

Archetype of Imagination occurrence in decks from the last year 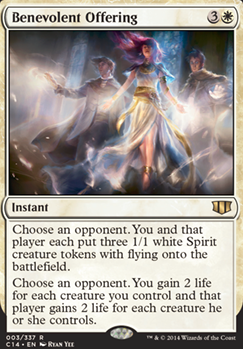 Pramikon, The Great Wall of AMERICA
by Willis1994

Get Lit
by kaje 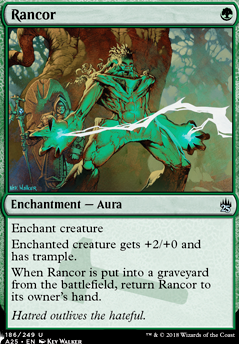 Omniscience_is_life on Why do people hate Blue?

golgarigirl thatâs definitely the experience I had as a new player, basically anyone could bluff having a Cancel and Iâd quail. Another thing is, especially for new players, fliers. Not being able to stop an incoming attack from a Levitationâd up baddie except maybe with your one Mammoth Spider that you thought looked cool can be a tough experience. (And yes, I know red has dragons, and white has angels, but blue has Archetype of Imagination-type effects)

I liked your video, and am glad to see a non-degenerate build of Zur. I think Toothy, Imaginary Friend is a better inclusion than Stoic Champion, and does a better job than Mulldrifter. I think that Steel of the Godhead is a good aura for Zur when everyone has flying murder machines out, or Archetype of Imagination out. Tribute Mage is a great inclusion, I use it to find my signets, Fluctuator, Blackblade Reforged (for those oloro players) , and Fellwar Stone. I'm sure a lot of these cards weren't around when you made this deck. Astral Drift speaks for itself, as does Crystalline Resonance. Escape Protocol is my back up for my backup, and may not need to be included, but I like being able to keep Fluctuator and it's the only Astral like effect that hits artifacts that I know of. I would love to see you update this deck with the new sets out.

An old friend of mine had a snakes on a plane deck using Levitation but luckily we also have Archetype of Imagination for Commander. Adds some nice, effective flavor, if that's something you value in a deck.

Yes, I've looked at Dolmen Gate before, itâs not that bad. It is a lot weaker than Reconnaissance (also gives all creatures vigilance) but still protects the commander. That is one card I've considered before.

I donât know about Akroma's Memorial and Archetype of Imagination, Most of the creatureâs tokens already fly and that CMC is just so huge. I liked Cathars' Crusade in the deck for power reason, but I removed it for tracking reasons. With all the tokens it was becoming so confusing to track all of them.

Most of the time I have no problem finishing off opponents, so power pump enchants are not necessary but will consider them. Most of the time the only thing I struggle with is Boardwipes and constant removal.

5/29/2019 Unsure of whether or not I like Archetype of Imagination or Nylea, God of the Hunt more for this deck. Will playtest and see.