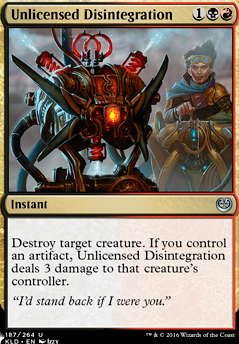 Destroy target creature. If you control an artifact, Unlicensed Disintegration deals 3 damage to that creature's controller.

Unlicensed Disintegration occurrence in decks from the last year 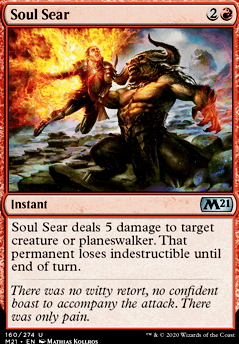 Mommy dearest may I play?
by Stardragon 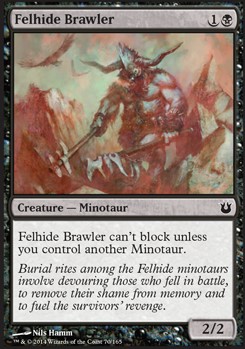 wildturtles - Hey! I definitely agree with Knollspine Dragon and Sneak Attack needing slots. I don't have a spare of either and will have to order some copies soon. My wife really likes Magus of the Wheel in here so I don't think that will be going anywhere. I'll have to think a bit more on what to take out as Unlicensed Disintegration is a nice way to remove and ping to get Rakdos out. Tectonic Giant if not removed is a monster in this deck too. He definitely needs to stay. But great ideas on the other two. I'll have to figure out what to slot out at some point. Thank you!

Knollspine Dragon is amazing in this deck, maybe take out a draw spell or Magus of the Wheel? Also having things to cheat in creatures if rakdos isn't out or is being removed a lot can be a lifesaver sometimes, things like Sneak Attack, and Quicksilver Amulet are great backup in the deck. I'm not sure what I would take out for those though,maybe Unlicensed Disintegration, or Tectonic Giant?

looks great. I am going to have to build one for my self. Might remove Unlicensed Disintegration and splash blue instead

Seeing as you have no artifacts, something like Terminate would be better than Unlicensed Disintegration in this list. Also you should swap out the Lava Coils for Lightning Bolt s. Modern is a fast format, so anything above four mana should be cut from your deck. If you're interested in playing a Midrange game, then you can add more removal or counterspells to fill in the slots your 5cc+ cards were in. Also your probably won't be having many problems with hexproof creatures, so Detection Tower can be cut for another land. If you are worried about Bogles, then you can run Liliana's Triumph .