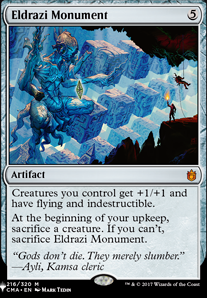 Creatures you control get +1/+1 and have flying and indestructible.

At the beginning of your upkeep, sacrifice a creature. If you can't, sacrifice Eldrazi Monument.

I have three 5-color decks and they all run almost the same $30 budget land-base.

Warriors of the World Unite is my Najeela deck.

Purphoros is some spice I didn't think of. Oketra too. Same with Breath of Fury. Might have to add that one. I just took Eldrazi Monument out of one of my decks... might have to add it to my Najeela list. I need to find room for my Shared Animosity already, though.

Hey man, love the deck! I've got a couple of recommendations for you:

Vedalken Orrery: This card is amazing in this deck, letting you flash cards like Marton or Krenko at the end of your turn, giving them both a modicum of protection and pseudo-haste.

Akroma's Memorial: This card gives all of your tokens some more hitting power, protection, and evasion.

Eldrazi Monument: This gives your team some much-needed indestructibility so that you don't get blown out by a board wipe.