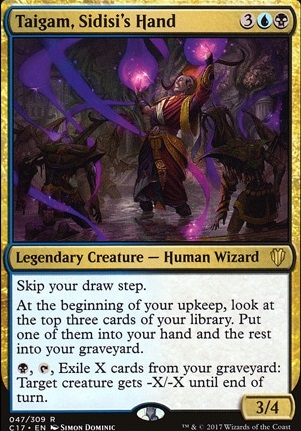 Skip your draw step. At the beginning of your upkeep, look at the top three cards of your library. Put one of them into your hand and the rest into your graveyard. B, t, Exile X cards from your graveyard: Target Creature gets -X/-X until end of turn

Taigam, Sidisi's Hand occurrence in decks from the last year *cocks gun* You're draw step. Hand it over.
by Ghettomcrunfast

Hand of Hidden Truths
by Mattismen

I should be cosplaying as Taigam, Sidisi's Hand if that helps

Thank you Savydoublestrike for your support, its mean a lot to me <3

Also, as you requested, its been a pleasure for me to reviewed your Taigam, Sidisi's Hand , I think this dude can be a lot of fun!!

It's a pretty nice start, with some key discard cards already in there. In the tests I've done, I feel the discard theme is not doing quite enough right now. You need the powerhouse cards such as Zombie Infestation to really start doing things, but you should have some more powerhouse cards. I must admit, though, that I'm not quite sure what other powerhouse discard cards would be.

I do have some other suggestions. Replace Frilled Mystic with Diplomatic Escort or Stronghold Machinist . While they don't do the exact same thing, with the Escort and Machinist being tap abilities, they do have the additional effect of adding to the discard possibilities. Frilled Mystic is pricey in terms of mana, so you'd be better of playing a normal counterspell if that is what you really wanted.

Underrealm Lich could be amazing. For every card you draw, you essentially get to draw three and choose one that best fits your current needs. It does fill up your graveyard very fast as well, but I think that'll be helpful the majority of the time.

Taigam, Sidisi's Hand could be very nice. It's essentially a card without downside, as you'll have your commander out most of the time anyway, which means it's just an extra card. You'd even be able to choose which effect to activate first, which means you draw to seven with Damia and get another card with Taigam. The activated effect is a decent way to get rid of threats on the board, as long as you fill your graveyard quickly enough. Combined with some more graveyard filling effects, it could be very useful.

Tasigur, the Golden Fang is a nice political card, and also has synergy with the graveyard theme in these colours. It fills it up, and you can make some nice deals. Should be fun.

Brawn is an awesome card in this deck, as you'll be able to use the big creatures you have, such as the growing Chasm Skulker or Oneirophage, and actually smack people really hard. It's another great card in a graveyard synergy deck, so it should work well.

In case you need more removal, Dark Withering is a madness removal spell. Not the best, but madness cards are quite rare. A general tip would be to pay close attention to the new Commander 2019 set, because one of the decks will be Madness themed, which means there'll be new madness cards and reprints soon. That's nice for the price of cards as well.

Abandoned Sarcophagus is a nice card for all the cycle cards you have in the deck, as you'll get to cycle them as well as cast them from your graveyard.

Psychic Possession is also a great card in combination with your commander, as the downside of skipping your draw step doesn't do anything for you, so instead you'll get to draw a lot of extra cards for each card your opponent draws.

Tamiyo, Collector of Tales or cards with a similar effect could be nice against a certain types of decks. cough Shattergang Brothers cough

Overall, I think that adding a graveyard theme to the deck could make the discard theme a lot better. You already have a few cards in your deck that allow you to cast or return cards from your graveyard, so why not add more and allow the two themes to complement eachother? Sidisi, Brood Tyrant could be a starting point to look for some more cards.

Best of luck, and happy deckbuilding :)

All Hail the Brood

I think you want to go in on the self-mill, make zombies theme, so you should trim the fat on things that don't fit what you want to do. I like the dredge cards, and I like the cards that put cards from the top of your library into your graveyard to trigger Sidisi, Brood Tyrant .

Cut Prime Speaker Vannifar , Razaketh, the Foulblooded , Sidisi, Undead Vizier , Tasigur, the Golden Fang , Taigam, Sidisi's Hand , The Scarab God . I'm not big on counters, so I'd probably leave out Frilled Mystic . Liliana of the Veil and Liliana Vess don't really fit the theme. Switch Wonder for Filth , especially since you're running Urborg. I think most of your tutors could go, so Diabolic Tutor and even Jarad's Orders could go. I'm not sure Jarad, Golgari Lich Lord fits very well, other than he's a zombie. If you see yourself sacrificing lots of zombies to him, then keep him.

You should run Rooftop Storm , and consider Soulquake . Take out Shriekmaw and put in Fleshbag Marauder (fits the tribe), and don't forget that Gray Merchant of Asphodel is a zombie, too, and you're running a high black pip count; he'll pay off. I'm wavering on Meren and Muldrotha; I see why they are here, and how the will be useful...especially Muldrotha. If you had to choose one, I'd keep Muldrotha. Villainous Wealth is fun, but is it what you want this deck to do?

I hope that helps you get started!

Try pairing card selection with your mill to get more value out of those spots. Fact or Fiction , Search for Azcanta  Flip, Sphinx of Uthuun , Patient Rebuilding , Jace, Vryn's Prodigy

I'd cut a land, Taigam, Sidisi's Hand , you could cut Birthing Pod or Prime Speaker Vannifar (I don't think you need both), maybe Search for Azcanta  Flip and Desecrated Tomb (I don't think you'll get enough value from this to run it).

So, I think what you need to do is focus your deck. It looks like you tried to take a bunch of Sultai good stuff and cram all of it into your deck. It looks like you are trying to do a "lands matters" build with a ton of value creatures in it, too. You have to figure out which way you want to go, as you probably won't be able to do both (but if it works, I guess go for it...I just don't see it). If it were me, I'd cut the lands matters route, but keep just a few of the cards for value, like World Shaper and Boundless Realms .

You've got a ton of creatures crammed in here, and are running quite the reanimator package to go with it. I think this can work well, too, as you can cast a creature once with Muldrotha and then a reanimating enchantment once per turn. You might be running too many creatures, though, and not leaving room for other permanent types to get the value out of Muldrotha, so look at this and see how it plays for you. It may be tough to do both the reanimator route and the lands matters route, but please, let me know if it works out well for you. I hope my suggestions help out a little.