As long as Deadeye Navigator is paired with another creature, both creatures have ": Exile this creature, then return it to the battlefield under your control."

Locus of Treasure
by StaffOfSage 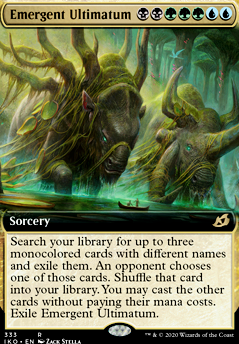 Lands of Creation
by Zypharia

Have you considered Peregrine Drake yet? Paired with Deadeye Navigator it's an infinite mana combo. It's a bit costly to cast but it will untap the lands you used to cast it and then the combo is running.

Daveslab2022 thank you for the feedback! Yes, stern mentor was one that I was thinking would get swapped. I was thinking of putting in Deadeye Navigator or Tandem Lookout in its place.

some infinite mana combos to throw in would be

Freed from the Real or Pemmin's Aura + Bloom Tender or Gyre Engineer or Selvala, Heart of the Wilds

Here's a bigass combo for the new Omnath, Locus of Creation:

The basis of the combo is Ruin Ghost + Retreat to Coralhelm + any haste enabler + any land that taps for or more. This means you trigger Omnath infinite times, but as many people have pointed out, his trigger doesn't do anything after the third time (as in he doesn't specify what to do after the third resolution of the ability). The easiest way to remedy this is to blink Omnath, in this case with Deadeye Navigator and Omnath himself -- every second trigger gives you , so you can use the blue and any other to flicker him and start over. Still, this isn't infinite mana though, because Ruin Ghost's activation is specifically , so we need a mana doubler of some kind, in which case we win!

Omnath, Locus of Creation + Ruin Ghost + Retreat to Coralhelm + Deadeye Navigator + Mass Hysteria + any land that taps for or more + something in the vein of Zendikar Resurgent. And none of it requires , so you can put this into your EDH Omnath deck. (And yes there are probably easier ways to go infinite with Omnath, but I wanted to include the Coralehelm Ghost combo.)

Add in Deadeye Navigator and Peregrine Drake and you can spam a lot of them.

But literally none of those cards are in the deck, and Deadeye can go infinite in much easier ways.