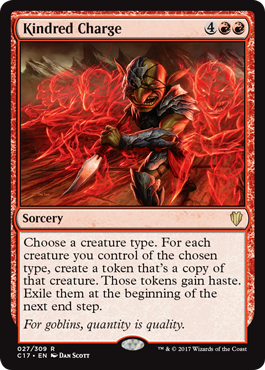 Choose a creature type. For each creature you control of the chosen type, create a token that's a copy of that creature. Those tokens gain haste. Exile them at the beginning of the next end step.

Kindred Charge occurrence in decks from the last year

Dont play overloard as your general he gets boring fast. As for a win con just play a bunch of stuff and swing. Giving your stuff evasion helps. Path of Ancestry , Kindred Charge and Kindred Discovery are all solid non sliver cards. You have access to any removal counterspell or board wipe in the game so the options are pretty much endless there

Boza on Jegantha In sliver decks, is ...

The problem with Jegantha is that it does next to nothing. It is the worst companion of the bunch because the payoff and the restriction are way too imbalanced. If you get to those 5 mana, you are better off casting Hivelord/Queen/Overlord/Legion/The first sliver.

You can replace some of the lack luster dinosaurs like Huatli's Raptor with changelings such as Changeling Berserker which also has a budget blink effect and can get you your ETB triggers more than once or Mirror Entity can make your smaller dinosaurs threats, along with making non dinosaurs you have benefit from the dinosaur buffs, and with just the mana it took to cast your commander every creature will have a base power and toughness of eight, which is higher than most of your creatures. There's also Kindred Charge which is a good finisher but it doesn't get around the legend rule so you wont get multiple triggers from your commander. Helm of the Host does get around the legend rule though. And a card like Life's Legacy can be used as efficient card draw.

Hmmm. In that case, what about either/both Kindred Charge/Heat Shimmer or Kindred Summons might be helpful... And with the doubling season/Kazuul Warlord idea, maybe a Cathars' Crusade?