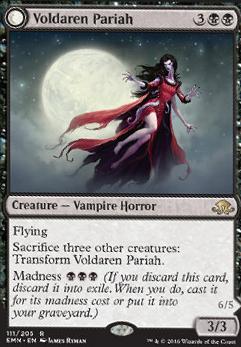 Voldaren Pariah occurrence in decks from the last year

I am the night (Batman Commander?)
by Voltron3030 I saw some variant of this go up against GW taxes in modern. Did pretty well.

Only drawback I remember is with Voldaren Pariah  Flip. Someone can kill it in response to you sac'ing 3 creatures. 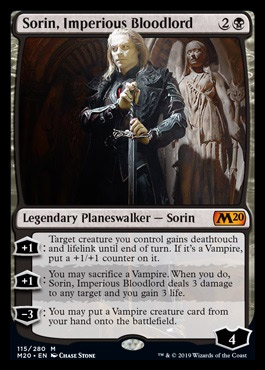 Hello! The first and the main question: what's your budget? Because you need to fix mana base at first: Watery Grave , Drowned Catacomb or Darkslick Shores instead of those dual lands you have. Speaking about creatures: Cryptbreaker is one of my favorite zombies. Card advantage plus madness enabler - and very cheap. Unbreathing Horde isn't bad but Diregraf Colossus is much better. Voldaren Pariah  Flip? Just because its madness cost and transforming effect? I think Grave Titan is better but it's a question of taste (and budget of course). You can also use Fleshbag Marauder + Gisa and Geralf . And what do you think about Endless Ranks of the Dead ? Some words about sideboard: hand disruption - Duress (but Thoughtseize and Inquisition of Kozilek are much - much! - better), control and discard - Compelling Deterrence (cheap and fun, yes), removal - Vraska's Contempt .