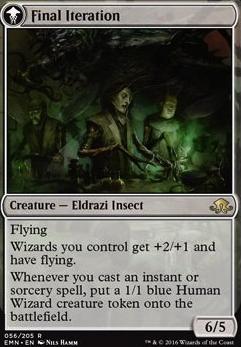 Wizards you control get +2/+1 and have flying.

Whenever you cast an instant or sorcery spell, put a 1/1 blue Human Wizard creature token onto the battlefield.

The Fun Police
by gshealy 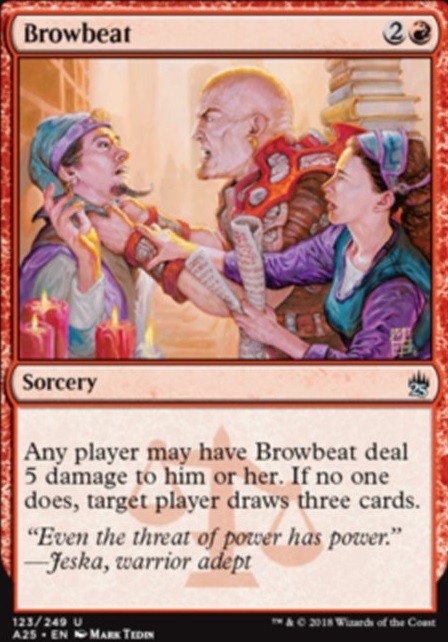 Izzet, Mizzix, Niv-Mizzet What is it?
by Killa556

Wanted to keep this deck fast with a lot of card-draw and tutors.

Draw your deck and put Laboratory Maniac on the field then draw one last time. Take board control with counters and make your wizards strong with Final Iteration, Akroma's Memorial, Caged Sun, Naru Meha, Master Wizard and Coat of Arms. Or simply go infinite with Isochron Scepter and Dramatic Reversal. Then simply retun every permanent of you opponent to their hands with Capsize.

thejeffreyman, control as a main strategy with Inalla as Commander is much very different than what this deck is doing. That being said you have the right idea with Docent of Perfection  Flip. But to play this card and use it with control you want to play lots of low mana cost instants and sorceries especially dig/draw. Dig/Draw for two main reasons you have to first actually find/draw Docent. Then when you have Docent in play to use your mana more efficiently to make Wizard tokens while digging/drawing at the same time to find more instants/sorceries.

You'll want much more instants/sorceries than creatures. In a sense this conflicts with using Inalla as a Commander because her eminence is the most powerful ability and it requires creatures. Using Inalla mainly as a combo piece is fine because she's a combo piece in the Command Zone, you don't have to tutor/find her or worry about drawing her. I now see why you want to play Sundial of the Infinite because the more Wizard tokens you have the better Final Iteration is.

Cards that could be good with a control version of Inalla with a focus on Wizard tokens, which aren't played here. I don't know what your budget is so I'll suggest nonbudget cards as well as budget ones (in no order):

Clones seem good with Docent. Being able to clone it and then make even more tokens when you cast an instant or sorcery. Clones of Iteration also add more pump to Wizards giving Wizards +4 power with flying with two Interation is a lot. Cloning Docent however will not let you flip the clone of Docent into Iteration because Clones are not double sided cards. The only way to get a clone of Iteration is to actually clone Iteration after Docent flips into it. Clones are also very good with eminence because you don't have to choose to clone your own creature with the eminence copy token you can choose to clone an opponent's creature if you want.

UR a snapcaster mage, Harry

Learn2Tech, I really like those ideas. I've thought of pursing a wizard sub-theme for a bit now, but I fear it would detract too much from the delver strategy. Delver of Secrets  Flip already wants a low density of non instant/sorceries, and the only other wizard in the deck is ol' snaps. Both Wizard's Lightning and Wizard's Retort would be much much better if delver remained a wizard when transformed. I like your list! I'd recommend Final Iteration  Flip if you're looking for a more wizard-spell-slinging theme

i really think you should cut mercurial geist for Bedlam Reveler. first, its a horror, so it survives any later turn TiTi flips. also, it's really easy to cast when half your deck is instant/sorcery. also, its ability is great late game advantage to get yourself some value. mercurial geist, sure, can lead to winning games, but strays from the path of using Titi and docent to win. those two are great. the only problem with docent is thing in the ice flips away all your wizards no matter what, and Final Iteration  Flip is not a horror.

for your sideboard, instead of disperse and void shatter, maybe Essence Scatter and Censor. if you just want an absolute counter, sure, void shatter, but censor is a great card. also you can cycle if you don't need it anymore. great late game from that. essence scatter is just a better counterspell if you're going to counter creatures. its literally a Counterspell for creatures.

Good going on your success with your Modern deck.

You need to get rid of their damn Anti-Infect cards!

I'm not surprised that people are playing them. I hear that Infect is a well-known Modern archetype, and one of the stronger decks.

Sorry it took me so long to reply. I'm a bit over Magic at the moment.

Although we have found an EDH play group that we like better and have been having a bit more fun with that.

StuBi kicked Rite of Replication targetting Final Iteration  Flip on Monday and whacked us all down to zero. That would never have happened in our other play group.

Big plays like that are what I love about EDH.

i run a standard UR Fevered deck that's similar in some ways to this one. honestly, i love Lightning Axe paired with Fiery Temper--2 red mana for 5 dmg to a creature & 3 to a player/planeswalker/creature is so lethal for so little.

it seems like yr avoiding creatures in this deck, which is fine, but i'd still run at least one (if not two) chandra's, if you can afford them of course. she's simply too great to not use her, especially when yr aim is to inflict direct burn to the player. plus, she can generate extra mana for her secondary +1, in case you wanna Cathartic Reunion into a Fiery Temper or w/e.

if you DO decide to run some creatures, the obvious first choice would be Thing in the Ice  Flip, tho it's not necessarily the BEST choice in most local metas that i've seen, considering everybody & their mom seems to be running a playset of Fatal Push. i kno this is prob gonna be an unpopular comment, but i honestly love Docent of Perfection  Flip in my Fevered deck. i only run one of them, but i have another in the sideboard in case i'm playing against someone with ridiculous removal. EVERY TIME you cast an instant/sorcery, docent pumps out a 1/1 wizard, which provides chump blockers or, at the very least, a distraction from your normal wincon (burn to death). &, in my experience, i've been able to flip docent  Flip the turn after i dropped him like 50% of the time. for example: i draw him late game, play him, & then next turn i play a Baral's Expertise into a Lightning Axe into a Fiery Temper at madness value & BAM, there's three 3/2 flying wizards (PLUS the flipped/pumped Final Iteration  Flip) in two turns.

I made a deck very similar to this yesterday, and my first picks were Final Iteration  Flip for some helpful wizards, Volcanic Vision and Shivan Meteor. Feel free to comment at Izzet Carpetbombing