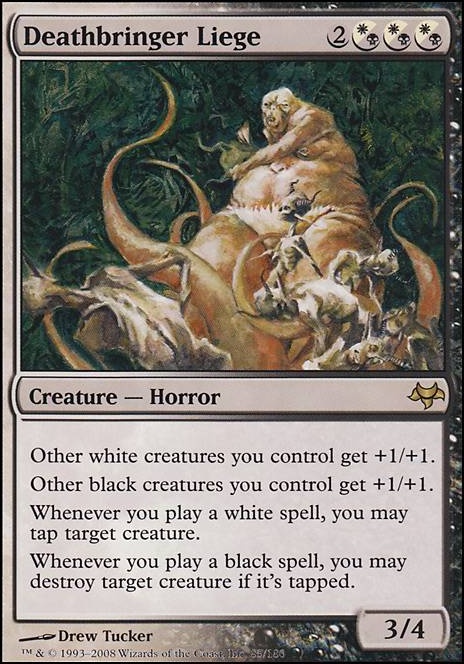 Whenever you play a white spell, you may tap target creature.

Whenever you play a black spell, you may destroy target creature if it's tapped.

Teysa Envoy of F*cking
by Bobbysdadthom 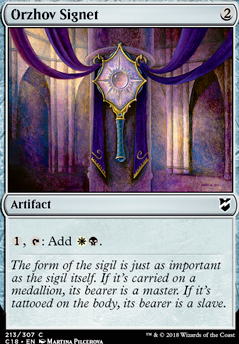 Have you considered Reassembling Skeleton , Gutterbones and Debtors' Knell for recurring deaths?

And a personal favourite of mine: Deathbringer Liege .

Ah, what a rookie mistake!

That's some good advice, thanks.

I don't want to drop too much cash on this, but Gideon's Avenger and Sunblast Angel from your deck look like they'd be useful.

Deathbringer Liege may work if I chuck in a couple of cheap black instants to support it, like Midnight Charm and Rathi Trapper , or simply Terror . It might be wise to ditch the 2x Frost Titan for the sake of the mana curve and to accommodate black / white creatures instead.

I guess if I wanted to make something based on the Scythe then Deathtouch and forced blocking would be the way to go, and/or creatures that have abilities to deal damage like Jagged-Scar Archers , Femeref Archers , or Tahngarth, Talruum Hero (or any number of red creatures). Totally different deck, but it's something to work on.

DrukenReaps: You have a point, I'd like to fight the case of Creakwood Liege though, given that a majority of the creatures with Infect are Black or Green. Also the 3/3 tokens are good chumps, trades via Hell's Caretaker, and if they build up Triumph of the Hordes gives them all infect.

Agreed about the others being more "neat" than anything now that I look at it. I doubt really have enough WB spells for Deathbringer Liege, a ciphered creature can be removed, the other is kinda situational, and the hard to cast Obliterator. May need an extra removal spell in place of the other, but we'll see. Thanks for the suggestions.

TheAmazingSteve: I did think of that, and I had a few more sac outlets when I was considering a mill package, but yes, it seems a bandaid unless you can sac and repeat. Thanks for the suggestion.