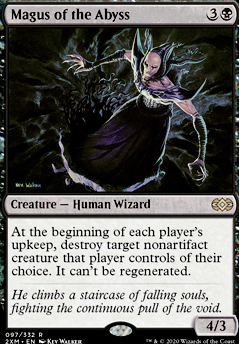 Magus of the Abyss

At the beginning of each player's upkeep, destroy target nonartifact creature that player controls of their choice. It can't be regenerated.

Every Dusk Rose Has Its Thorn
by S1ayerMonkey

Magus of the Abyss Discussion

dbpunk on Why Are Empress Galina and â¦

For Tsabo you have Isochron Scepter and any 2 or 1 mana instant kill spell at 2, you can use Magus of the Abyss, etc. Hell for the same effect nearly exactly, you have Avatar of Woe, which is usually a two drop when you cast it.

For Gallina, literally anything that lets you take control of a creature will do it. Theres plenty of spells that let you steal a creature without paying , and for her mana cost exactly and 1 less power you can use Beguiler of Wills.

At the begining of each players turn, they sacrifice a non-artifact creature.

+2: Put a +1/+1 counter on up to one target non-artifact creature. that creature becomes an artifact in addition to its other types.

-8: Each opponent gains an emblem with "whenever a card is put into your graveyard from anywhere, you lose 2 life, and each player without an emblem gains 2 life."

a mix of Ashnod's Transmogrant, Magus of the Abyss, and Bloodchief Ascension, feels kinda neat.

make a white card that draws, but on-flavor for white

Hi Final-Wolf, some of the more expensive dual lands can be replaced by cycling fetchable lands or other things that can provide the dual lands. You can also replace The Abyss with Magus of the Abyss , Chains of Mephistopheles with Mindslicer and Nether Void with another stax piece.

Hi schnernv, sorry for the delay.

My favorite play is Contamination , locks most of the people out of the game.

Now I need some efficient way to deal with planeswalkers, Pithing Needle is not enough... Thinking about The Immortal Sun or going big with Karn, the Great Creator plus Mycosynth Lattice .

Rhystic Study replacing Mystic Remora , based on my local meta.

Bloodchief Ascension replacing Magus of the Abyss , Magus never help to much, interaction between Zur's Weirding and Ascension are much better.

Narset, Parter of Veils replacing Chains of Mephistopheles , instant and sorcery spells are too valuable to just throw them in to the grave.