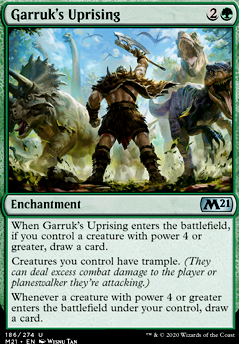 When Garrukâs Uprising enters the battlefield, if you control a creature with power 4 or greater, draw a card.

Creatures you control have trample. (This creature can deal excess combat damage to the player or planeswalker it's attacking if lethal combat damage would be dealt to all blocking creatures.)

Omnath, Locus of Creation
by TxRanger 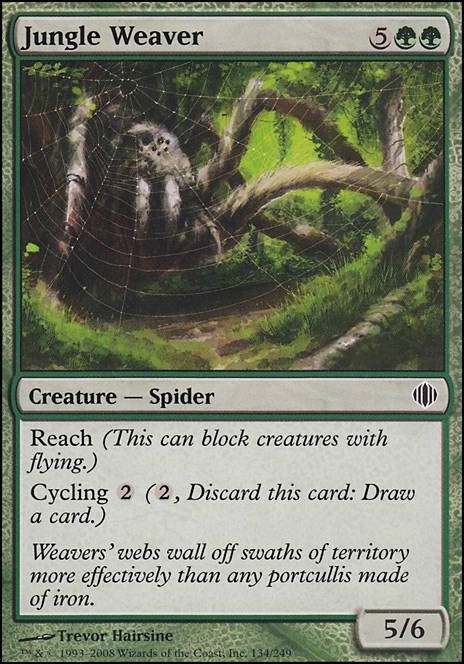 It's not worth running red just for one card. You would be better off running 2 The Great Henge or Garruk's Uprising if you want a cheaper card and drop Terror of the Peaks and go down to 24 lands

I can support your analysis for Turntimber Symbiosis Â Flip. If a copy becomes available I'll give it a whirl or two in the deck and observe the results.

I am happy you agree about Bala Ged Recovery Â Flip. I sense Wizards played it safe with the vast majority of these double-faced spell/land cards, and I think this card is a good example of that theory.

I do want to play-test Moraug, Fury of Akoum. The extra combat phases accrued by simply playing a land seems very valuable.

Recently, with the help of the MTG Burgeoning community, I've been constructing a Zaxara, the Exemplary EDH/Commander deck. A copy of Garruk's Uprising resides in this deck list and I just completed a nine-game play-testing with the deck. I can comfortably and securely say that Garruk's Uprising is an awesome card in that deck and I believe it would be an awesome card in Xenagos, God of Revels. Personally, I would not consider including Elemental Bond over Garruk's Uprising. These two enchantments have the exact same mana cost of , but Garruk's Uprising provides trample. The power trigger for drawing cards is a bit higher than Elemental Bond, but for me, I only have two creatures in my deck with power less than four and over a dozen creatures without trample. I plan to insert Garruk's Uprising into the deck as soon as a copy becomes available.

Cragcrown Pathway, and all of the Pathways, should be EDH/Commander hits! Get on board baby!!

I may have to give Inscription of Abundance a serious test-run. I keep returning to this card and mulling over the modes in conjunction with the mana cost and the value seems too good. An instant speed fight spell is generally 2CMC. Placing two +1 +1 counters on a creature at instant speed is generally 3CMC. Combined that's 5CMC. Paying the 5CMC cost and choosing all three modes will also include the upside of gaining a ton of free life. Inscription of Abundance seems too valuable to ignore.

Your assessment of Shatterskull Charger was entertaining. I was laughing to myself about "love taps." Hahaha! I'm just interested in seeing what the giant can do...

I will keep you informed about the loveliness that will be Lithoform Engine. I predict big things!

The cost to activate both Crawling Barrens and Dread Statuary is the same, yes, and as you mentioned Crawling Barrens's effect is cumulative as those +1 +1 counters stick around. I'm evaluating this card with the long-game in mind. We'll see how it shakes out.

Hey Draknoz! Thanks for your suggestions!

Card draw is very important! I do have trouble finding slots for it, though. Burst draw is pretty conditional, and if I have a dragon out I will always have another thing of higher priority to play, but I will get Kiora, Behemoth Beckoner, Garruk's Uprising and Elemental Bond, if I can find spots for them. I had Kindred Discovery in the deck (Bought a japanese printing of The Ur-Dragon

precon for cheap) but had to take it out because it was being underused for such a high mana cost.

I'd love to hear your thoughts on what to cut!

Turntimber Symbiosis - I like it because the 3 life is the cost to have the option of an additional card. Given as you said, it isn't like to whiff. Personally, I also refrain from cards like summoning trap and the like for the reasons you mentioned, whiffing and losing your mainphase. But with so many creatures and it taking up a land slot, I personally feel the versatility is warranted, not taking up a land slot but providing options for 3 life seems great.

Bala Ged Recovery - I am on the same page, every point you mentioned.

Moraug, Fury of Akoum - I feel so so about him. On the one hand he can get out of hand (lol). On the other, he is just a big dude with no trample. I dont have many ways of providing trample in my deck as most of my creatures either have trample or some sort of evasion. Plus it sucks to play him as a 6 drop when you have already played your land per turn. The idea with fetches is interesting for sure.

Also, what do you think of Garruk's Uprising and Elemental Bond? They will provide you draw for 25-27 of your creatures. Uprising also provides trample which is nice. I've needed more card draw in Xenagos and has 2 flex slots. I've been considering adding these in my deck link and wanted your opinion, for both your deck and mine. My deck solely relies on burst card draw, so some steady card draw might be worth considering. My only issue with both is that by the time I play them I might draw 1-2 cards before it probably gets destroyed. Its not removal bait, but I feel they take too long to get the value out of. Idk

Cragcrown Pathway - WTF is this? How have I not seen this in the set. It taps for red or green, depending on which side you play on the field? Thats crazy! I NEED this. Thank you for bringing it to my attention.

Inscription of Abundance - One of those cards I looked at and thought hard about. Your points are well taken, I like the cheapness and flexibility of it. The real benefits are the counters and fighting as life gain is not substantially helpful in my meta (unless of course you're playing against xenagos :P)

Shatterskull Charger - 3 mana on a small beater? You want to smash face, not give them love taps. The fact that it returns unless you kick it bothers me as its a continuous cost you need to pay. All of our creatures are effectively safe from sorcery removal as xenagos provides haste and we only play 1 creature at a time.

Lithoform Engine - One of those cards I'm always on the fence about. Even in my mono black deck where I can abuse it, it seems very winmore. It helps if I have the mana to cast everything I want, but until that point, its not that helpful. More playtesting would need to be done of course....but in Xenagos? You would play this (and maybe something else). Then cast a big creature and not have the 4 extra mana to copy it, or a big permanent spell. Of course it works with fetches, sorcerries, etc... but idk....? Once you add it in, please let me know how it functions.

Card draw! The most important two things in edh are ramp and card draw. Your ramp looks good but card draw is important! I recommend burst draw like Rishkar's Expertise, Greater Good, or even Selvala's Stampede. (Not really draw but gets you a ton of free dragons) Repeatable draw is also good Garruk's Uprising, Kiora, Behemoth Beckoner, Rhystic Study/Kindred Discovery ($$$), and Elemental Bond.

Hey Profet93, I see you also have a Multani deck. Nice! I have a few tips for you to consider:

multimedia on EDH Under $1 Series - â¦

Hey, here's some Commanders from the Scryfall list and cards that are $1 or less that are good with the Commander: