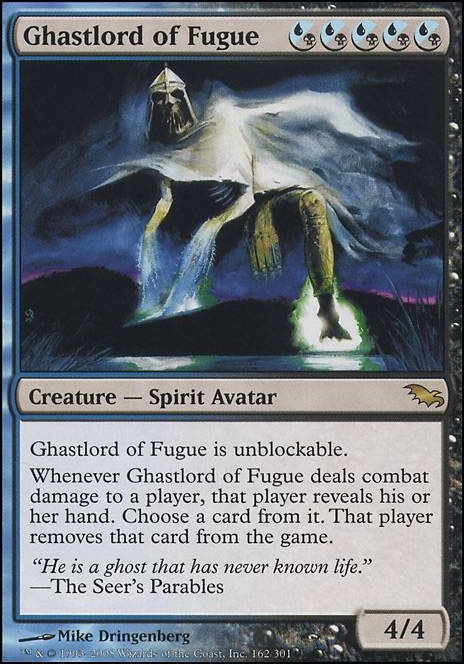 Ghastlord of Fugue is unblockable.

Whenever Ghastlord of Fugue deals combat damage to a player, that player reveals his or her hand. Choose a card from it. That player removes that card from the game. 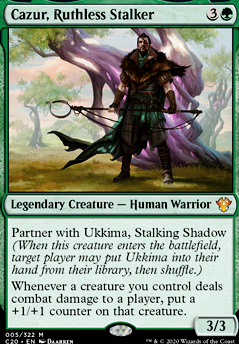 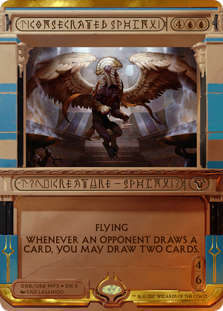 Hey, some good suggestions so far, here's some more:

wallisface Good point about lily and I just think Bloodghast I have never been a fan for the years ive been playing modern. It cant block and its just a 2/1 that comes back? but maybe it could be good with lily specifically so I dont lose as much card advantage. And I had no demigods at first and just had 2 gry and 2 Ghastlord of Fugue But Im just not sure maybe I should only run 3 gray merchant and no other 5 drops? But what would you replace 5 drops and with? I dont think 5 4 dorps is unreasonable.

Flip and Ghastlord of Fugue have black in their color identity. Withengar has a black color indicator, while Ghastlord has black symbols in its mana cost.

The 4 spirit avatars are probably worth mentioning too, if hybrid mana still counts as mono-black. Deity of Scars, Ghastlord of Fugue, Demigod of Revenge, and Divinity of Pride. Excellent if you're trying to get heavy black devotion for Gray Merchant of Asphodel. Demigod in particular is brutal.

DrukenReaps on The Gods need your help!!!!

A friend of mine built a god deck and was having trouble with devotion so he included some of the following and they really helped.

Deity of Scars, Demigod of Revenge, Deus of Calamity, Divinity of Pride, Dominus of Fealty, Ghastlord of Fugue, Godhead of Awe, Nobilis of War, Overbeing of Myth, Oversoul of Dusk, Progenitus.

He only runs 3 or 4 of them but most of them are interesting options to run. Fist of Suns is also really nice in his deck.

Schemes of the Omnipotent

Hey, I play a similar deck in esper that tries to control the opponent's hands. Some cards I play in it are: Silent-Blade Oni, Ink-Eyes, Servant of Oni, Mindleech Mass, Ghastlord of Fugue, Shimian Specter, Doomsday Specter, Kheru Mind-Eater, Rootwater Thief, Head Games and Glasses of Urza. Maybe some of those cards would also work in your deck. Also Mindclaw Shaman.