Green mana doesn't empty from your mana pool as steps and phases end.

Omnath, Locus of Mana gets +1/+1 for each green mana in your mana pool.

Omnath, Locus of Mana occurrence in decks from the last year

Devoted to Omnath
by S1ydevi1 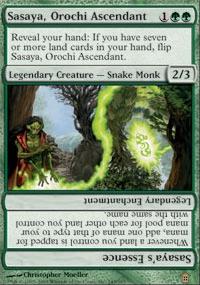 Bloodsucker1211, in order to net mana with Doubling Cube you need at least 7 mana in your mana pool before activating its ability. This is a bit of a high activation requirement, and functions better with decks that allow you to hold mana in your pool between phases and turns (ex: Omnath, Locus of Mana and Kruphix, God of Horizons). Instead, this deck uses infinite mana combos with cards like Pemmin's Aura which have a much higher power ceiling and lower opportunity/required cost in a deck like this.

Adding to the deck is possible, but it would probably make the deck slower with little pay-off. Omnath, Locus of Mana is a potential finisher, but he does not have trample, which means we still have to run Finale of Devastation or similar, and the Finale also allows us to find a missing Nyxbloom Ancient. I have more reasons than these, but I believe these are sufficient. Thanks for your interest in the deck!

I would of also of said Omnath, Locus of Mana but I read your thoughts on him already, but i will say this he can and cannot work with your commander depending on how you use. Yes he can a beatstick if your not spending the mana he soaks but that can be a fall back if thing get hairy (which since giving you recommendations I've played test this and runs super great), but his ability for you to squeeze his mana out of him can help your commander overrun ability be used multiple times without have to your lands so you have mana to other thing if need or vise versa. And also as he is a big target for people so you could use that to help save other key creatures from being hit by spot removal or counters (I do that with some of my combo decks and it funny how much that trick works and I end up winning because they focus on a big target card instead of the combo card I need to win). But again ik already read about what you said about him just wanted to put my two cents in feel free to ignore this post

If "creating absurd amounts of anything" is your idea of fun i would vote for Omnath, Locus of Mana.

BenWin: I can tell by your comment that you are a seasoned Om_rath player! Thank you for your support all these years! A ton of new commanders have come out these past few year, but this guy is still one of my favorites. It is quite possible that you have played more games then me at this point! haha. When I built this deck I had only one baby to take care of... now I'm expecting my forth! Needless to say, life has gotten pretty busy, and I don't get to play nearly as much as I would like.

As for your suggestions, they are all extremely solid! To be completely honest, I already added Ancient Tomb a few weeks ago (I found a Expedition for trade right before the pandemic hit). I took out Lotus Field, it was pretty underwhelming. Thoughts?

World Shaper in for Traverse the Outlands is actually very reasonable. I think Outlands is better in a deck like Omnath, Locus of Mana, who can just empty the basics from your deck. 5cmc for 5 basics isnt bad, but 4cmc for all the lands in your grave might be way better.

The Chord of Calling with Finale of Devastation debate is not a argument of 1cmc less, in my opinion. The fact that Chord has Convoke pushing that argument in its favor if you ask me. To me, it is an argument if adding a graveyard tutor is worth replacing an Instant speed tutor (Finale's pump and haste ability is fluff 99% of the time). The debate now is that Finale can ramp with Dryad Arbor for 3cmc if I need it to, so an arguably worse Cultivate (comes in untapped versus getting another land to your hand). Chord on the other had is an amazing trump-card when your opponents think you are out of mana. Many times have I convoked out a win when my opponents let their guard down. This can be done in responce to something they are doing, or at the end step right before your turn (Avenger of Zendikar is a favorite of mine for this). All of this being said, Finale seems to be more flexible early game, while Chord is more flexible mid to late game. So, to make the deck better it is always preferable to optimize the early game when possible, so in the end it looks like this would be a good swap. However, the real question is if we could somehow include both? Could we add Finale of Devastation in for something else under the pretense that worse case it is just a bad Cultivate? Definitely everyone is open to share their opinion on this!

Migration Path for Explosive Vegetation is a no-brainer. Done and dusted.

Thanks for taking all that time to give some feedback! Let me know what your thoughts were from my opinions. The only reservation I have from your 4 suggestions was the Chord for Finale swap, but I am more then willing to discuss it more!

Thanks, Savagegammer. I don't know if Omnath, Locus of Mana quite synergizes enough wit the plan of the deck. Definitely would be curious to see how you think it could work. I mean, it's a great card, but is it adding enough value to the main game plan. Let me know what you think.