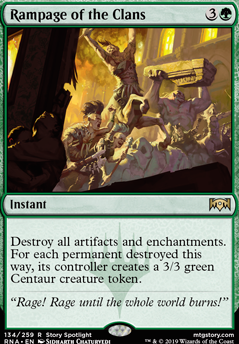 Rampage of the Clans

Destroy all artifacts and enchantments. For each permanent destroyed this way, its controller creates a 3/3 green Centaur creature token. 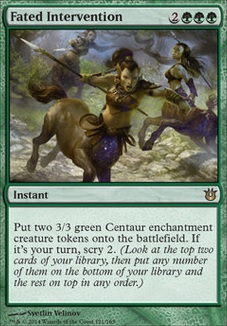 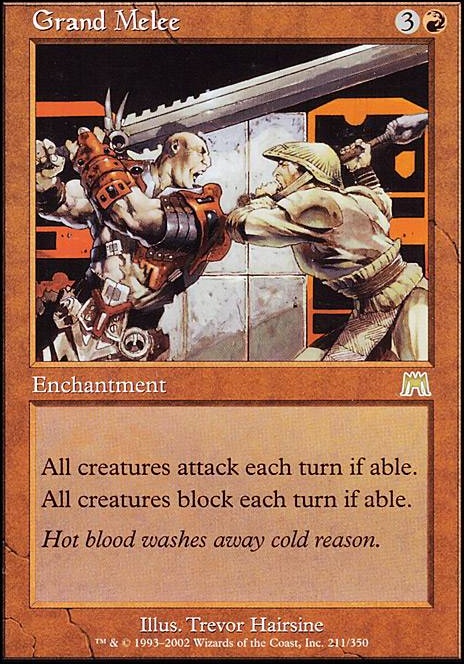 Rampage of the Clans Discussion

Yeah it seems like you have enough! Glad you agree about Rampage of the Clans. Itâs really an amazing wipe when a meta doesnât have enough artifact or enchantment removal.

I could probably use a Shizo too... I def donât own one. I also would love to get my hands on a Teferi's Protection because itâs amazing. That one hasnât decreased as much though.

Iâm super excited for all the content coming out this year also! Itâs a weird worry to have but I hope that it isnât too much new stuff. I had a hard time keeping up with War of the Spark, MH and the Commander decks lol.

All great suggestions. I updated the primer above, check out the Problem Solvers tab. I honestly think I have enough, but a full wipe via Bane of Progress is tantalizing. Rampage of the Clans is super fun at instant speed too!

You snag any good deals from the mystery boosters? I picked up a foil Shizo... only to realize I already had one.

Im stoked for the upcoming Ikora release and green EDH reprint thing theyâre doing here soon. From the sounds of it, fetch lands will be returning later this year(outside of the stupid secret lair release). Hoping to finally snag a Verdant Catacombs and Sylvan Library at some point.

Would Rampage of the Clans have a place in this deck? I know they're not Dinosaur tokens, but it may be good removal

I tried some builds, but Tezzeret, Master of the Bridge and Saheeli, Sublime Artificer had too little synergy in a food centered deck. On the other hand, I found a build that focuses entirely on Rampage of the Clans which seems pretty fun, so I'll put the link here. ããã¤ã¹ã³ãã