(Transforms from Journey to Eternity.)

, Tap: Return target creature card from your graveyard to the battlefield. 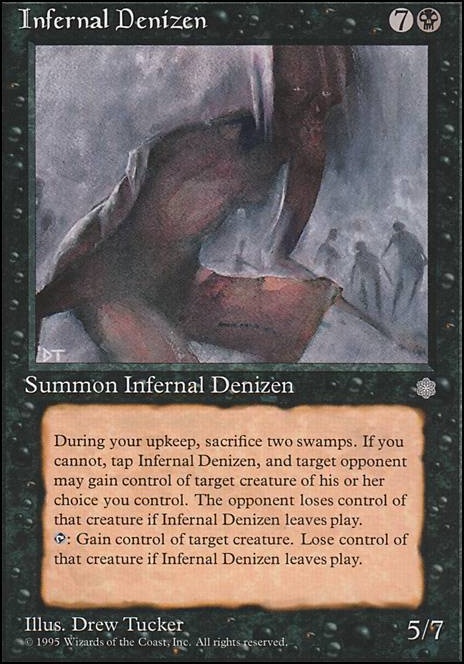 Shattered my pants - Don't Jund me
by SirrHosis

On the backs of the dead *meren Cedh*
by lamagic

smashadams83: Due to the updated wording on Necropotence (notably not printed on my copy), you still discard the cards and they get exiled from your GY. This means that discarding extra cards with Necro DOES trigger Archfiend of Ifnir, though you wonât be able to reanimate those cards at sorcery speed (so no Victimize or Reanimate, but you CAN get them back with Atzal, Cave of Eternity).

Well, i think u need to play quite a few more lands, 22-23 i'd say. Atzal, Cave of Eternity really is Journey to Eternity  Flip, so u need 3 mana and a creature that dies to flip it,... 4 Izonis is a bit too much, cmc 6 with 18 lands is nearly impossible , even if u run more lands he is still quite expensive,... I think running the explorers is a must in a golgari standard Deck, so i'd suggest 3x Merfolk Branchwalker, 3xSeekers' Squire and 3x Jadelight Ranger. they all fix ur mana and fill ur Graveyard,... -4 Glowspore Shaman -1Hatchery Spider, -4 Stitcher's Supplier, -4 Molderhulk, he is the only reason u want to get a lot of creatures into ur graveyard,...+ 4 Lands. But Golgari can be a lot stronger, if u want to spend the money on it,....

Another strong card in here would be Palinchron, it already combos nicely with Atzal, Cave of Eternity and Phantasmal Image, which are good cards on their own. Maybe your friends wont like it for the combos though.

Well this is quite an interesting Deck, been trying for a Journey deck myself, but the Problem is: it takes 1 Field of Ruin to spoil the plan. Been testing it against myEverybodyneedsaNexusDeck and theres not a chance for the journey,... that made me test more, imo this deck relies a lot on the perfect draws for turns 1-3, so , Llanowar Elves, , Thrashing Brontodon, a 3 of, this works only if ur Elf still lives, (Shock, Fatal Push), then turn 3 1 more mana, flip to Atzal, Cave of Eternity, then turn 4 1 more mana, Play Gonti, Lord of Luxury only a 2 of, get Gonti in the graveyard, repeat his ability. I don't say this doesn't work, it does, but not really consistent, i think. and against really fast Decks i think its hard, as well as hard-Control ones. still +1, i like it.

Hey, there's a little more than a month left until Standard rotation (Oct. 5th). My advice is plan your deck now for post rotation. Get it ready for Guilds of Ravnica because both Golgari and Dimir (two guilds of the Sultai wedge) are in the set. Most likely there's going to be a new Golgari and a new Dimir dual lands as well as both guilds will have a lot of support in the set. This is great for Muldrotha.

In the deck description you mention the interaction between Muldrotha, Hostage and Reborn. You've already nailed a possibly competitive post rotation strategy with Muldrotha. Both Hostage and Reborn are going to be good cards post rotation especially Hostage, who's a powerful card who currently sees zero play. Explore, the mechanic from Ixalan survives rotation and it's very good with Muldrotha. Post rotation expanding on explore with Seekers' Squire and Jadelight Ranger seems strong especially Jadelight. Saga's can find a home with Muldrotha because they give an enchantment card type to cast from the graveyard and they self sacrifice.

, but these three cards are rotating out of Standard. Journey survives and is good with ETB Explore creatures and graveyard strategies as well as creatures who have powerful ETB abilities such as Hostage and Ravenous.

The reason I like Journey with Muldrotha is it's as a back-up plan if Muldrotha is exiled. Atzal, Cave of Eternity can then be used to start reanimating creatures from the graveyard. Muldrotha can also allow casting Journey from the graveyard. One big problem with Journey is it's an Aura which means your prone to getting 2 for 1ed by opponent. Thrashing Brontodon can self sac this is good if it's enchanted with Journey.

My advice is if you want to play Muldrotha post rotation is get a playeset (4 of) of Hostage Taker because right now she's only $3, which is low. She'll increase in price post rotation.

Nice deck idea you have for the return of fungus and thalid cards. You have also done a great job keeping the deck very budget friendly as well. Might have to sleeve this up and give it a shot. Now to find a way to squeeze in Journey to Eternity because of the high death rate of Tendershoot Dryad so we can keep bringing it back with the flip side Atzal, Cave of Eternity.

Nice take on the new format.

If I were you I'd lose the Bontu's Last Reckoning in favour of Heroic Intervention.

I know Atzal, Cave of Eternity can get your Creatures back, but you don't always have it on the field.

Bontu's can destroy all the work you've put into setting up your Creature base. Heroic Intervention protects them.

It might also be useful to find a place for Blossoming Defense.

Fliers cause this deck a lot of problems.

Fatal Push and Walk the Plank might help with that.

Hey, adding blue for Champion of Wits adds a lot a good way to churn through the deck to draw Journey while also putting creatures to be reanimated into the grave, nice job. Wits is also an excellent creature to enchant with Journey.

I have some suggestions:

All my suggestions are budget creatures that work very well with Journey since they give you a powerful ETB ability. Freebooter is especially good because it can help to make sure the coast is clear to enchant a creature with Journey. You don't want your creature to be killed in response to enchanting it giving your opponent a 2 for 1.

Zealot like Champion gives draw when it ETB and out of the options in Standard draw is up there as a one of the best ETB abilities. Because of the ETB draw for Zealot I think it's better here than Glint-Sleeve Siphoner.

Multiple triggers of Gonti's ETB is very good because each time it's triggered you get to exile a card from your opponent's top four cards and each card that's exiled stays exiled until you cast it. Gonti's ETB ability is better than World Shaper's abilities. The deathtouch on Gonti makes it a fine creature to enchant Journey making your opponent have to think twice about attacking you from the ground since they will lose a creature from deathtouch while also flipping Journey and then losing a card from their library to Gonti's exile.

For a reanimation target Noxious is good especially when you can reanimate it with Atzal, Cave of Eternity at instant speed which can be a blowout. It's ETB ability and more utility than Aethersquall Ancient.

I suggest main decking Moment of Craving as the budget Fatal Push alternative removal spell to combat aggro. If you don't need it as removal for an opponent's creature than you can use it to kill your creature who's enchanted with Journey at instant speed. It conveniently kills Wits, Chupacabra, Zealot, Freebooter, etc. It doesn't kill Brontodon or Gonti. Consider cutting Servant of the Conduit for Craving?

Energy is not where you want to be simply because there's better two drops with ETB abilities that have much better interaction with Journey compared to Servant. Servant and Hub make a nice team to splash a third color, but in this case I don't think Servant helps enough to be included.

I don't think you need to play Benefaction of Rhonas or Banewhip Punisher. Yes Benefaction can find both Journey and a creature, but it's another three drop and right now there's too many three drops. Wits, Brontodon and Journey are the best three drops here. 12x three drops is really pushing it. I suggest cutting the 7x additional three drops for two drops: Freebooter and Zealot. Punisher as creature removal is redundant because of Chupacabra and Chupacabra is more powerful card because of it's ETB ability.

For the manabase consider replacing Hub with Evolving Wilds and some Basic lands with some budget dual lands: Submerged Boneyard, Foul Orchard and Woodland Stream?