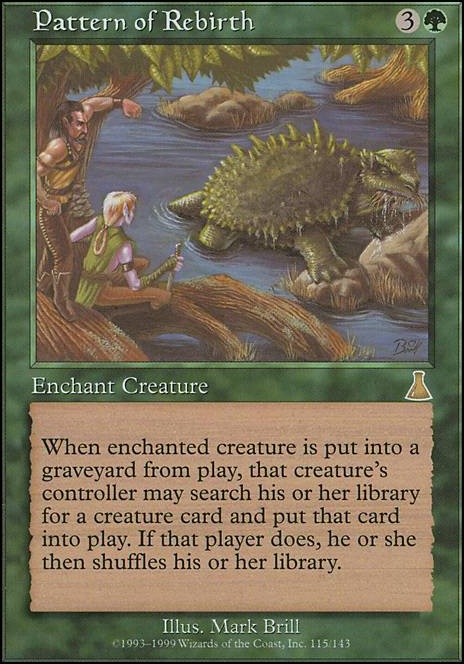 When enchanted creature is put into a graveyard, that creature's controller may search their library for a creature card, put that card onto the battlefield, then shuffle their library.

Pattern of Rebirth occurrence in decks from the last year

This could get "Dire"

I found this because I'm building a Kardor enchantment deck as well. Cool to see the ideas others have around similar deck ideas.

I built my first Kardor deck this past November at Command Fest Seattle, and it ended up with both Heliod's Pilgrim and Monk Idealist . I was able to play Heliod's Pilgrim then search for Pattern of Rebirth to put on it. I could then sac the pilgrim and use rebirth's trigger to find the monk which sent pattern of rebirth back to my hand. This sets the deck up to start getting some value and it's what lead me to want to build the enchantment focused version. On that note, I'm surprised not to see pattern of rebirth in here? Also, maybe an Auratouched Mage ?

Did you end up keeping this deck together and taking it any further?

multimedia on 6 mana turn one, green ...

With Pattern of Rebirth you're going to want a low CMC self-sacing creature so you can enchant that creature with Rebirth and then sac the enchanted creature to trigger Rebirth. In my first comment I suggested Tinder Wall and it's a self-sac creature who costs no mana to sac. Wall + Rebirth is only five mana which is conveniently the amount of mana that Seething Song makes.

Funkydiscogod on 6 mana turn one, green ...

If you can get a Boonweaver Giant or Auratouched Mage in your graveyard, you can cast Footsteps of the Goryo or Wake the Dead , and you'd only need to make 3 mana.

Depending on the creature you're planning to find with your Pattern of Rebirth , there are probably better ways put it on the battlefield.

hello. thank you for answers. i'm trying to build deck around something like Pattern of Rebirth to get fat creature on turn one.

Megalomania The reason you're getting staxed out is because of greedy mana base and card choices in your hulk list.

You're getting hosed on your mana base from Blood Moon because you run 8 outs for making non-red mana if you don't already have it (4 basics, 3 artifacts, 1 ESG). I understand that traditionally the list doesn't run heavy artifact mana base but not having diversified mana base allows a Blood Moon + Pyroclasm to end your game. I've always believed that to be a weakness of the OG breakfast hulk list and its evident here as well. This is also why I suspect you basically ripped the breakfast hulk list. You're running Tainted Pact mana base and losing to Blood Moon without even running Tainted Pact ahahahahahahahahaha

Tbh I don't suspect you're angle shooting anymore, just that you're bad. Which is better and worse in a few ways. Regardless, its a laugh you think we are too focused on flash hulk in a thread about flash hulk. I'm sorry the brain dead deck you play is the thread topic, but don't shift the conversation to "but the other fast combo does x y and z". After deflecting, you went for "Oh come on bro just play the archetype that shuts it down", then advocated for people to play the wrong style of deck to shut it down.

There aren't good options for attacking or interacting with the flash hulk package, besides aggressive mulligans for specific pieces. There isn't an archetype that shuts it down, just a handful of various quality cards without enough density for regular and consistent interruption. On top of the problem already existing, and the clowns who run the banlist not giving a shit, new printings are exacerbating the problem by allowing for winning hulk lines that hold priority until all the winning elements are stacked.

To answer your question about how much I lose, I lose all the time bud. In a format that is 1v1v1v1 you're not going to get a 50% winrate. The difference between you and me is that if I get absolutely BTFO'd by Blood Moon in my 29 land deck, I make edits to my deck to better play under Blood Moon effects. The problem with Flash Hulk is that if I get BTFO'd by the Hulk, I have to switch my deck colors to include blue to handle it reliably. Do you see the difference? That's why Hulk needs the ban.

StopShot humbled indeed. Thank you for correcting me.

DrukenReaps hulk would still work. There are non blue hulk variants that use reanimator strategies, Natural Order , and Academy Rector with Pattern of Rebirth to cheat hulk in to play. Those all require having a sac outlet, so the best hulk deck available afterwards may actually be varolz hulk but I personally am a big fan of abzan hulkweaver.

The thing with the non blue variants is that they are forced to have both a way to get hulk in play and a way to kill it. Flash does both things currently when blue is available.

@sam171z, I've never built in golgari colors or green more specifically so my advice might not be the best.

Based on your deck you might find Arbor Elf helpful.

There's a lack of removal in this deck and you might find these cards helpful: Dismember , Go for the Throat , Sinister Concoction , Thrashing Brontodon , Sylvok Replica , Force of Vigor .

Skullclamp is a really good card draw source especially if you pair it with Bloodghast and fetch-lands. Dark Tutelage is another option if you don't mind the life loss. Mirri's Guile seems to also be pretty strong with shuffle effects like fetch-lands.

Pattern of Rebirth seems like a really strong tutor effect for you.

Melira, Sylvok Outcast might be a good inclusion as you can win the game with her + Devoted Druid + Walking Ballista / Bloodrite Invoker .

Hope this helps you.