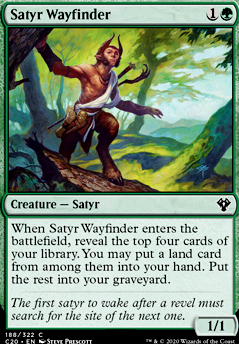 When Satyr Wayfinder enters the battlefield, reveal the top four cards of your library. You may put a land card from among them into your hand. Put the rest into your graveyard.

Satyr Wayfinder occurrence in decks from the last year

Most Grave Tidings
by ZechEllen98

Good observations, dichia. I remember contemplating Commune with the Gods and deciding against it, I think it was because in that slot it was a battle between that or Winding Way and WW won out. I figured that without enchantments in my deck the card is less effective than WW which would let me grab a creature or land, whichever I needed at the moment. Yeah it dumps an extra card in the graveyard compared to WW, but I have enough mill outlets already.

I think I passed on Satyr Wayfinder only because every dredge/delve deck Iâve seen used him and I just wanted to break away a little bit. Make this build more my own. Itâs definitely a capable card.

As for Logic Knot...I wasnât aware of that. I donât play much blue so my knowledge of that colorâs cardpool is rather limited. I love the idea of Logic Knot, but without dramatically restructuring the deck I donât think I could incorporate it. Maybe if I threw in some Zagoth Triomeâs or something, but with just those it would be kinda unreliable I would think. I just donât know how Iâd squeeze it into this build:/

Thanks for all the good ideas though.

A splash of blue could be interesting. It gives you more options for your self-milling strategies and also other delve cards like Logic Knot to protect your big creatures once on board.

Anyway, Satyr Wayfinder and Commune with the Gods are two other green cards that could help you thin the deck and find what you need.

MrBoombastic and LeBonco22 I actually cut Collected Company and added Cavalier of Thorns Awhile ago. But I never updated it on here. I am trying out Satyr Wayfinder And it definitely helps to mill for Uro. I am still unsure if the speed of the deck holds up. But it seems more reliable. My thought is with m21 coming out I might put in Azusa, Lost but Seeking to help with playing lands. And I have changed up my lands to include a few more utility lands. Any other suggestions of things Of cards I could cut and replace in order to help the deck.