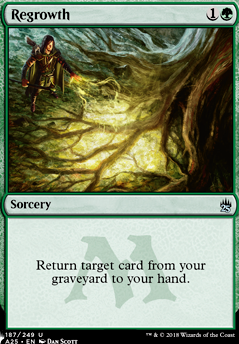 Regrowth occurrence in decks from the last year

Spin the Wheel
by asarov

Two drop Forks may be boring, but they're also some of the best cards/most mana efficient with Kalamax. The efficiency comes from copying an opponent's instant/sorcery which then gives you two copies of that spell as well as putting infinite counters on Kalamax. This is a ridiculous amount of value from a two mana card. Since a Fork can copy an opponent's instant/sorcery this makes them in multiplayer Commander really never dead cards unless your opponents are not casting instants/sorceries. Infinite counters onto Kalamax are a bonus; the real value with Forks comes from the copying and then copying again of the instant/sorcery.

Forks are also excellent with your own sorceries which with Kalamax gives you two copies plus the original spell for a total of three. Kalamax + Chandra's Ignition + a Fork is game over for your opponents. Merchant Scroll, Regrowth and Preordain are already good mana efficient sorceries that become even better with a Fork or Ral. Ral is a good card with Kalamax and a bonus is he can copy a sorcery you cast.

If having problems with Kalamax getting locked down than consider adding more removal that can remove a permanent? Especially an enchantment or artifact since these permanents can lock down Kalamax much easier than a creature can. Currently you have Beast Within and Cyclonic Rift that can do this and you don't want to have to bounce an opponent's permanent that's locking down Kalamax, you want to destroy it/tuck it. Some instant creature removal is good to have, but other permanent removal is in my opinion much more important. Having Mystical Tutor lets you cut down on creature removal (tutor for it if you need it) and instead play other permanent removal which will have more targets to remove to help Kalamax.

Lands suggested from the crowd: Mosswort Bridge is a land in green stompy thats usually worth entering the battlefield tapped

Blighted Woodland is acceleration when you're leaving up protection. Myriad Landscape works the same, but the ability is cheaper. It does enter tapped though...

Bonders' Enclave works fine when your commander is 4 power

Ghost Quarter, Tectonic Edge (and less budget, Strip Mine or Wasteland) are things you need in commander, there's too many of Cabal Coffers and Itlimoc, Cradle of the Sun (also not bad in your deck btw) in the format to skip on land destruction, and lands that destroy lands are the most efficient at that.

Scavenger Grounds thwarts your Regrowth a little, but it thwarts most black and green commanders a lot more: take Meren of Clan Nel Toth, or Muldrotha, the Gravetide, they're pretty devastated when you uncounterably remove most of their resources from the game. There's enough caring about the graveyard to at least consider this, if you're not heavily using it yourself.

Nykthos, Shrine to Nyx is amazing in most monocolored decks, but a little on the $$ side.

Rogue's Passage is a scary prescence when Voltron is your plan, even when you have the deathtouch as a deterrent.

What would you think of Seasons Past in here? Perhaps replacing one of your Regrowth type cards? Helps in the board wipe recovery area.

LimbicCircus: Thanks for taking a look!

I hadn't put Explosive Vegetation in here because of the high CMC. I might consider the new Migration Path, since it can be cycled if I draw it in the later game. Ideally I want to be done ramping after turn 3 at the latest, though this deck could potentially cast it as early as turn 2. It would be great if I did.

I have been thinking about Song of Creation. It looks really great. I just get nervous about discarding my hand. The deck runs so many instants that I usually want to have ready on opponents' turns, and recurring cards at instant speed is a lot harder than sorcery (since most of these cards are sorceries like Regrowth. I'll give it a try and see how it goes!