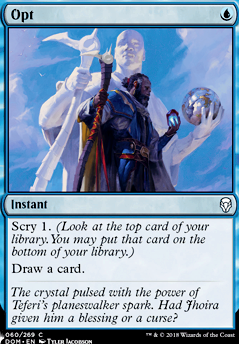 Opt occurrence in decks from the last year 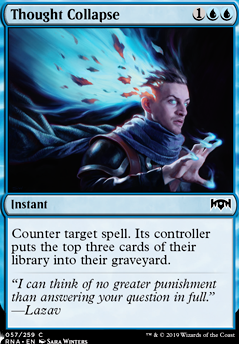 I think you're kinda stuck between 2 deck themes here. You have aspects of an Arclight Phoenix deck and aspects of a storm deck. I would really go one way or the other. If you want to be a storm deck I would add Baral, Chief of Compliance and another Goblin Electromancer and go for something link this: https://www.mtgtop8.com/event?e=25143&d=377298&f=MO

However, if you like the Arclight Pheonix part of the deck, I would drop the grape shots completely because you're only going to get a couple point of dmg, if any, from them. I would replace them with another Lightning Bolt and 2x Opts. I would also find room for the full 4 copies of Thought Scour. In addition, if you went this route, you would probably want a few more lands.

Patolea Awesome suggestions! You hit right on what I have felt like this deck is lacking - card draw. However, while I had considered cards like Brainstorm and Opt under the draw umbrella, it hadn't even occurred to me that they're useful for top-deck manipulation!

Question: If I'm adding in Brainstorm, Opt and/or Preordain, would it be better to cut Rogue's Gloves than Sword of the Animist?

Also, Scroll Rack might be too rich for my blood. I'll give it some serious consideration if my budget allows, though. I'm fortunate enough to have kept ahold of a lot of old cards through the decades that are worth a fortune now, but that one I've never heard of until now.

Jackfrost23 Hey thanks! I didn't know I had a fan base lol. I'll take a look!

Flooremoji I have a somewhat superficial understanding of control since I don't play it too often, but to my knowledge, when you don't need to counter something you would rather be drawing cards. So my logic was that when you leave up mana for a counterspell on turn two but end up not having to counter anything, you would rather spend your mana on a two mana draw spell than a one mana draw spell, since that means more draw/dig power. I can definitely see Opt subbing in to fill out a turn 3 curve, though.

To be honest, I'm thinking of cutting Telling Time for Think Twice. I've recently gotten a bit more experience with building control decks and I really like having the absolute card advantage. idk though.

Telling Time seems like it's not that big of an upgrade over Opt.

Unless you are anticipating finding two cards you like of of TT Anticipate could also be better.