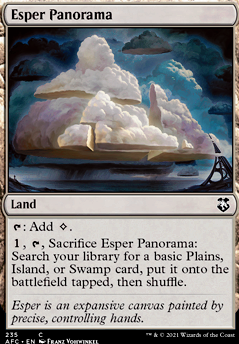 , , Sacrifice this: Search your library for a basic Plains, Island, or Swamp card and put it into play tapped, then shuffle your library. 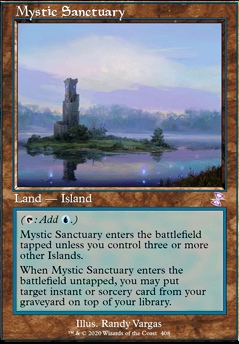 Zur tries not to die
by Zakglizand 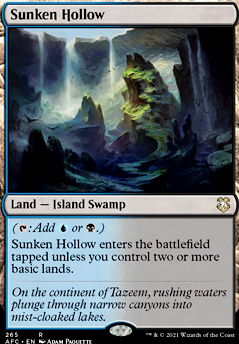 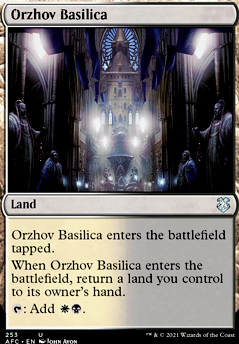 40 lands is a lot of lands and you also have ramp sources to help to make mana. You would be fine cutting 2-4 lands and filling those spots with low CMC budget cards that draw such as Omen of the Sea , Wall of Omens and Brainstorm . The idea is more draw that also has interaction with Aminatou could replace some lands because overall these cards are better for gameplay and the draw can potentially help to draw lands. You have a good number of basic lands for budget and the ratio is also on point. With 16 basic lands then budget dual lands that have interaction with basic lands help for them to ETB untapped.

Ideally, you want most if not all the lands in the manabase to ETB untapped to help gameplay. Since then you can tap the land for mana the turn you play it, but that's impossible when on such a low budget unless playing 30+ basic lands which is not recommended with three colors. The lands that you play that will always ETB tapped should have other uses or be able to make one of any three colors you need. An example is Arcane Sanctum is good, Dimir Guildgate isn't good. If you have to play many lands that always ETB tapped then might as well play the ones that also have bonus interaction with your Commander.

The Scry lands ( Temple of Silence ) and Halimar Depths ETB tapped, but they have interaction with the Aminatou + Guardian + Oath combo. Aminatou can blink a Scry land as the first permanent which lets you scry through the rest of your library to find Strix or another permanent draw source to cast to then draw a win condition to cast. The Gain lands ( Tranquil Cove ) also can be blinked and blinking one of them with the combo gives you infinite life. Consider three of each of Scry lands and Gain lands?

Utility lands such as Mystic Sanctuary give you something when it ETB, can be blinked by Aminatou and be part of the combo. Sanctuary when blinked if you control three other Islands can be a repeatable way to recur an instant or sorcery. It can setup a card with miracle since you recur the card to the top of your library to draw on your next turn or even on an opponent's turn if card with miracle is the first card you draw on opponent's turn.

Example of an upgraded budget manabase: