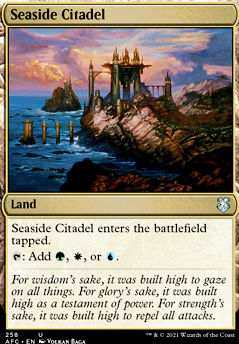 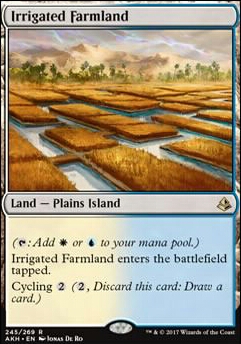 Tap it all
by Wirhouski

All very worthy points made!

I had the Elf package in this deck in the early going and found that it was very lack luster, a lack of haste to use, and especially once chulane was out simply not needed. Pulling one mid to late game, like most mana dorks, just felt deflating.

The 0 drops on the other hand, though disappointing when looking at, really can drive this deck more so then at first glance. Most of the time that 0 drop cast triggers chulane and has great benifit, either through etb or chulanes ability and for me, feels good mid to late game. They enter for nothing, trigger for 1 free draw and one free land drop and possibly a second by using chulane to return for 3 mana, or 3 mana for two draws and two land drops. Most players are not looking to counter or burn the "0" drop. They end up being chump blockers that I'm not thinking about tapping for mana while giving free cost, and if they are in the opening hand, once chulane is out, you can still bounce them back to your hand.

The land in the deck flows stupid out of it. I don't believe I've had a game with less then 10 mana at any time after the 6th round. That being said, as shameful as it is to say, I don't physically have a Seaside Citadel yet, also upon your comment I have realized that the land base has not been updated recently/regularly and will be corrected (tomorrow).

As for the Signets, that's more or less due to the meta I'm in being very creature heavy, hence very board wipe heavy. They are more likely to survive a few rounds lmao.

I am going to place the Fierce Empath back into this deck, I had it out for a bit, because I was playing a lot more smaller creatures, but with the adds recently I agree that having access to them would be good!

I'm also going to go looking for a Seasons Past - another card I'd forgotten about, but would be nice to have!

Cool deck!!
I would look at Seaside Citadel over another tapland.
Any thoughts about mana dorks over the 0 drops? I would feel a starting hand with Avacyn's Pilgrim and Llanowar Elves , Elvish Mystic , Fyndhorn Elves would feel a lot better than starting with memnite and Ornithopter... but just a thought.

In fact, there are lots more creature ramp you could run, downside is susceptibleto boardwipes. Up to you to decide if the synergy is worth running Fyndhorn Elder or Sakura-Tribe Elder over some of your signets.
Heck you could even consider Wood Elves or Farhaven Elf over sorcery ramps.
Also Fierce Empath is a great way to tutor your bane of progress, and Seasons Past is a great way to recur your creature cards after a boardwipe. And you can cast them again for more value!!
Just some ideas, cheers and have fun.

Definite things I should look at replacing with better or determine if they fit in: