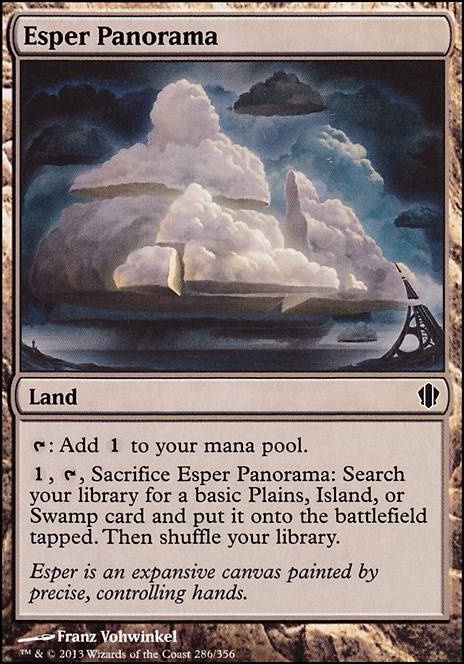 (1), Tap, Sacrifice Esper Panorama: Search your library for a basic Plains, Island, or Swamp card and put it into play tapped. Then shuffle your library.

Esper Panorama occurrence in decks from the last year 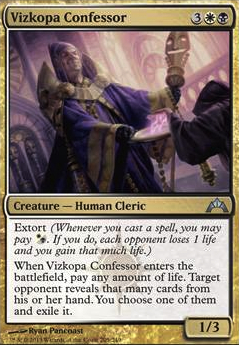 One of the best budget cards with Aminatou is Wishclaw Talisman. Activate it for one mana, tutor for any card. An opponent then gains control of it, but that opponent doesn't own Wishclaw you do. Your opponent will gain control of Wishclaw tapped, but they can't use it because they gain control of it tapped it's not their turn. Blink Wishclaw with Aminatou's -1, it returns to your control untapped with three new counters on it. Scheming Symmetry is another powerful budget tutor with Aminatou since the card you tutor for is put on top of your library. +1 Aminatou to draw that card.

Hey, I like your version of Athreos and it has a much higher budget than your Niv deck, nice Scrubland :) There's not a lot of versions of Athroes yet to compare too, but there's some really good interactions here especially Nightmare Shepherd and Mangara of Corondor.

Puppeteer Clique can steal an opponents creature from their graveyard, attack with that creature, at your end step stack the triggers to first put a coin counter on that creature then exile it, returning it to the battlefield under your control.

Eldrazi Displacer can be repeatable exile of opponents creatures for three mana. Steal any opponents creature at your end step at instant speed after you put a coin counter on that creature. Displacer would require more colorless mana sources from lands and mana rocks: Caves of Koilos, Fetid Heath, Talisman of Hierarchy, Mind Stone, Tainted Field, Esper Panorama, Ash Barrens. Displacer can also protect you from an opponent creature attacking you since if you blink an attacking creature it will leave combat and ETB tapped. Can also use the blink with politics.

Plaguecrafter and Fleshbag Marauder are powerful creatures in multiplayer Commander who can sac themselves or another creature you control who may have a coin counter. These creatures are good with Mimic Vat which would give you a repeatable creature at instant speed who can make all your opponents sac a creature. Vat can pair nicely with many board wipes since you can imprint an opponents creature.

Neat multiplayer deck! I can see it's based in voting and multiplayer politics, i'm a really big fan of this idea

I notice you're playing Terramorphic Expanse Evolving Wilds, and Esper Panorama without playing any basic lands... It may be worth it to take out some of the slower ETB Tapped lands in favor of some basics here.

You should consider some of these cards: Coercive Portal -> Nets you an extra card each turn or wraths the board based on each players' decision Oreskos Explorer or Boreas Charger -> Good way to get you out of a situation where you're down on lands, with a nice multiplayer theme Wayfarer's Bauble -> Mana ramp in non-green colors Crystal Shard or Erratic Portal -> Buys back your own creatures that may have ETB effects, can also save your duders in a pinch Split Decision -> Voting card that can either copy a spell or counter one

Some howling mine effects like Dictate of Kruphix or Howling Mine

Consider more ways to take advantage of Reveillark, Karmic Guide and Sun Titan? Altar of Dementia + Lark + Guide is infinite opponent mill combo that doesn't require an aristocrat to potentially win. Mill all your opponents or self-mill yourself until you find an aristocrat to win since you can reanimate it with Lark.

Lark + Guide + Blood Artist + Viscera Seer is one of the best Orzhov aristocrat combos and Buried Alive can tutor for and set up this combo by putting three of the creatures into your graveyard to reanimate them with Lark. Animate Dead + Leonin Relic-Warder + Artist is another powerful aristocrat combo. Warder enchanted by Animate creates a loop of Warder dying.