When Sage's Reverie enters the battlefield, draw a card for each Aura you control that's attached to a creature.

Enchanted creature gets +1/+1 for each Aura you control that's attached to a creature.

Fantastic Beasts and How to Pub Stomp with Them
by Slashdance

Paws For Effect
by meterstickjim

Aura Ya Dead Yet?
by flytyer97 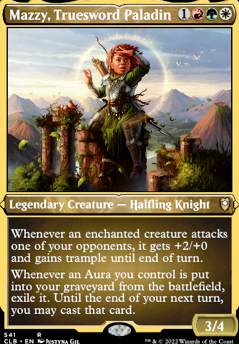 Good luck on cuts and obtaining the cards. A few of these are perhaps more cute then good justto give you options. Sage's Reverie will be night and day for you I think. If you have more nonbasic lands I'd look at adding some in. Warping Wail is a colorless option if you want a counterspell.

IHATENAMES Great recommendations! Some of these Iâve actually picked up and Iâm currently working on cutting them into the deck such as Kor Spiritdancer, Eidolon of Countless Battles and a few others, but I hadnât thought of a couple of those! (Sage's Reverie is on my list to get, my local store just hasnât had one in and I havenât ordered it online yet). Thanks for the input!

Hey! I think that you should use more Auras that draws a card when they enter the battlefield (e.g. Angelic Gift for flying, Grisly Transformation for evasion to non-Orzhov creatures, Sage's Reverie ). A card like Chosen by Heliod probably work better than Holy Strength , for example.

A card like Skeletal Scrying may help you drawing cards. You can use Auras destroyed by the first time Killian is removed to fuel it.

What do you think about Hateful Eidolon ? It can be a voltron beater and help you draw cards if Killian is destroyed. Scarab of the Unseen can also help you recovering Auras from a creature that is about to be destroyed. This with Auras that draws a card when they enter the battlefield may be a good card advantage play.

Maybe a boardwipe or two can help you in some situations.

SnakeByte77, I think I would remove Sage's Reverie to make room for Angelic Destiny , given that its abilities for draw and power increases are redundant through Kor Spiritdancer and All That Glitters , among other cards.

jamochawoke on What, Exactly, is Wrong with â¦

I think something people have forgotten to mention about card draw in white in this thread is that it has some pretty huge synergies with auras and card draw.

And there's tons of white aura support with graveyard recursion that stops aura's big downfall (2 for 1'ing a creature that's been enchanted with a Doomblade or something). So if you were running a white auras deck you wouldn't have any problems with filtering, card draw, or graveyard recursion. It actually plays more like a blue deck than anything else white has to offer. It's just been overshadowed by the bogles deck archetype for auras, due to its incredible strength and showing in competitive tournaments, which demands WU or UG as its colors. Basically, why bother with recursion when you can just pop auras on unblockable hexproof creatures and have a deck that can't be interacted with?