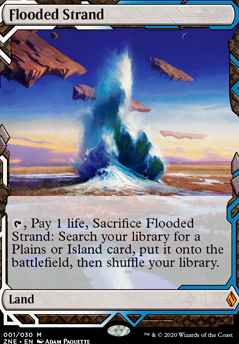 , Pay 1 life, Sacrifice Flooded Strand: Search your library for a Plains or Island card and put it onto the battlefield. Then shuffle your library.

Your deck seems really cool. I'm not a big fan of Bad Gift Zedruu but I have to admit it's an archetype that works.

I don't know if you've already played the deck, but does cards like Glacial Fortress trigger all the time ? Personally I don't run this kind of land, but I have less basic land than you. Also, fetchland are incredible cards in a manabase. If you have money for, add Arid Mesa , Flooded Strand and Scalding Tarn to your deck.

For the deck itself, it seems very consistent. I honestly think Thought Lash is a bad card : it take in average 13 turn to mill 90 cards (counting the natural draw of the opponent) and 10 turns to get rid of 60 cards.

Also, I wonder why you run Witch Hunt . It seems not really synergistic with Zedruu's life gain and cards like Angel of Destiny or Aetherflux Reservoir .

Finally, medallion cards (like Sapphire Medallion ) seems really good, I will try them in my deck some game to see how strong they can be. I advise you to run Thought Vessel rather than Spellbook (no maximal hand size while ramping ? Amazing !). Pentad Prism and Sphere of the Suns are pretty good rock to give away.

I love your idea to run Angel of Destiny : that's a so good political card, I've never seen it used like this.

In a nutshell, I think it's a really cool deck to play, Zedruu's ability is what make me fall in love with her, so I love seeing how people exploit it. Have fun, and don't forget to spray joy with our MotherGoat !

I'd probably start with replacing Oreskos Explorer with Archaeomancer's Map , and cut Oketra's Monument for something of your choosing. I'd also cut a couple basics for some fetchlands if you can afford them, Windswept Heath , Flooded Strand , and Prismatic Vista are all relatively cheap and have synergy with Mistveil Plains , Scroll Rack , Emeria Shepherd , and Altar of the Brood .

Hey Mtg_Mega_Nerds! I like your build! I am no super friends expert, but I have a few suggestions you may like. I donât see a budget tag so Iâm making recommendations regardless of cost.

I would run about 6-8 total fetchlands ( Scalding Tarn , Flooded Strand , Bloodstained Mire ) instead of Fabled Passage. And shocklands over the Temples ( Watery Grave , Steam Vents , Blood Crypt . Adding these cards will greatly increase your speed and consistency. You donât have to play the shocklands untapped if you want to save life, but at least you have the option. Running these cards will make the Signets basically unnecessary, as you can just fetch the lands you need. Same with Crumbling Necropolis, which comes into play tapped and is too slow for my taste. Another good land is Fiery Islet for card draw.

I agree with TriusMalarky that your mana base does not support Counterspell. Remand would be a better fit. Also 4x Thoughtseize will be a great fit, since it will help remove threats preemptively and scope out your opponentâs hand. You have no other way of dealing with problematic artifacts or enchantments and you are running relatively few one-drops. Angrathâs Rage only covers artifacts. Inquisition of Kozilek is a decent substitute.

I would run 3x Damnation over Ritual of Soot, since the former is strictly better. Languish is ok if your meta has lots of small indestructible creatures. Dismember is a viable alternative and costs less mana. Another alternative is Bontu's Last Reckoning , since you can use loyalty abilities regardless if your mana is tapped.

You may also want to consider 4x Feed the Swarm on your sideboard to combat enchantment decks.

Second on Blossoming Defense over Snakeskin Veil . The +1/+1 counter seems nice, but infect wants to win now, not two turns later. Same with Distortion Strike , especially with rebound, its great to get that myr or elf through. The Noble Hierarch are a lot more helpful then you think, so grab them first. Become Immense is a great finisher, but as was said above, you need fetches. In that same vein, if you're running fetches you will want the Breeding Pool to go with them. I'm not sure how much you are planning on putting into the deck, but the off color fetches with Windswept Heath and Flooded Strand could work well. If you want another two color land option, Waterlogged Grove is great, especially since you generally don't care about your own life total. Something spicy you can test is Charge Through . As an instant speed cantrip that allows you to push damage through, its a nice option on color. I'd also think about cutting the sideboard Invisible Stalker for Dismember so you have some removal.

Always glad to see someone else building infect, +1

I think that, that 2 more fetchlands (probably Flooded Strand for that's the cheapest) and maybe 2-3 Mystic Sanctuary could fit right in...

Letâs say you want to make this budget and not include the Flooded Strand and Aether Vial , what would you recommend to replace those?

TriusMalarky on Blood Moon or Boil??

Blood Moon is pretty much always better due to the fact that it hits nonblue decks. Which means Jund, and a lot of other decks.

However, you have 4 cards that have double blue. And they're SUPER important to your strategy.

So, what you need is fetchlands. I recommend Prismatic Vista is okay, any blue fetch such as Flooded Strand is fine as long as you find a copy or two of Steam Vents. Evolving Wilds can replace some of your taplands.

This is one of those things where your problem is finding a way to afford fetchlands. Blood Moon is 100% better in this case.

Unless, of course, you splash green and use tri-lands like that Triome and Frontier Bivouac and cut all your islands. Then you can use Choke.