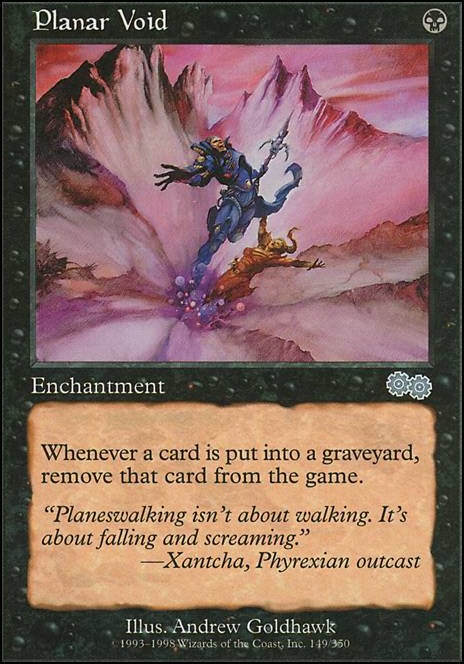 Whenever another card is put into a graveyard from anywhere, remove that card from the game.

mogis god of fuckery
by castlecustoms

Have you considered Grafdigger's Cage over Planar Void

XinZhao, good question. I have chosen to exclude Wheel of Fortune , Dragon Mage , Lion's Eye Diamond , and other cards that discard my hand because I am not running any reanimation cards - I am going all-in with stax effects instead. Most other Kaalia decks which utilize WoF have a reanimation package to bring back discarded creatures and are typically more aggro than this build.

Discarding my hand is usually disadvantageous for me, and I especially do not want my opponents to draw a new hand of cards too. Against certain decks like The Gitrog Monster , WoF helps them more than me. Apart from a deck building perspective, I personally do not own a WoF, so I tried to design this deck around that. Iâm running Planar Void and Rest in Peace as a weapon against other decks which use WoF or similar self-discard spells, to prevent my opponents from utilizing reanimation or graveyard recursion.

Love this deck. I have been working on something similar with Oona, Queen of the Fae at the helm but have been considering changing over to Circu. Couple of suggestions: Sphinx's Tutelage is another mill all of library with Painter's Servant and another good alternate win con / hate piece. Planar Void also looks like it would slide right in this deck as you don't have much graveyard interaction, also still allows Bloodchief Ascension to trigger. Lastly I would recommend the obvious Opposition Agent and Hullbreacher to add on the stax. Again, love the deck.

if you're not worried about recursion, Planar Void pairs with Energy Field stupidly well.

Solemnity also works well with Delaying Shield , Decree of Silence , and Force Bubble , although they aren't searchable by zur.

if you do want recursion, Hanna, Ship's Navigator and Hall of Heliod's Generosity are what I would recommend

MrNoodlesworth, I really appreciate your compliments! I have spent a great deal of time refining this deck and I am very pleased with its current form. I think a lot of people get stuck in the 8-Rack trap when choosing Tinybones, which only dilutes and slows down the deck in a competitive setting. Or they choose squishy creatures with abilities that are relatively under-valued.

And youâre absolutely right about Planar Void . As the owner of the triggered effects, I get to choose which to resolve first, the Void or Tegrid. Below Iâve attached a link to a handy explanation that summarizes this issue in a different but relevant context. However, the same cannot be said about Leyline of the Void , which is a replacement effect. So thereâs no chance to make a decision to take a card with Tegrid if the Leyline is in play. Iâve also been playing for over 20 years now, and I didnât know this distinction until another user pointed this out to me last year lol. We are always learning!

And I share your sentiments about the Tabernacle. Iâm leaving it as a maybe for now.