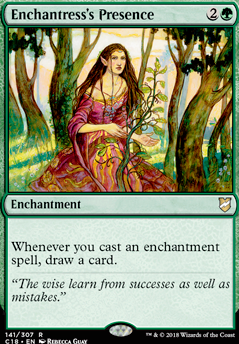 Enchantress's Presence occurrence in decks from the last year

Atraxa Queen of Voltron
by SirChris39

Thanks for checking out the deck. I took your advice and switched out the Boros Signet for Farseek Iâll see how that plays. I do like Enchantress's Presence Iâll add it to the maybe list and try and find a copy for cheap to add. Thanks for the upvote and the suggestions !

Well built deck. The only advice I would give is that you really don't need the signets when you have cards in green that search your library for lands and put them into play. Lands are much harder to destroy than artifacts, so green ramp cards would be better. Also you must REALLY include Enchantress's Presence.

This is my boomstick

I can see a lot of cards that I also played in my Uril deck,

Uril, Stalker with the Mist

First big issue is see is that you have very little ramp. At a minimum you should be running these mana rocks:Sol Ring, Arcane Signet, and three guild signets or three talismans:

Boros Signet or Talisman of Conviction

Selesnya Signet or Talisman of Unity

Gruul Signet or Talisman of Impulse

I run a lot more additional ramp in my deck. In fact I found making use of land auras like Fertile Ground help with my draw capabilities due to my enchantress effects. Cultivate alone isnât enough. Add Kodama's Reach, Nature's Lore, and Three Visits. Since you want to drop big auras like the Eldrazi aura, you should consider Academy Rector to cheat out one of those big auras.

You should consider adding the enchantress package:

Spot removal is important and Uril has access to Contested Cliffs. Hall of Heliod's Generosity is a great utility land to recur those lost auras. Kessig Wolf Run and Yavimaya Hollow are another great utility land.

I donât like Spectra Ward because once itâs on you canât add more auras. There are plenty of pro creature auras that are cheaper cmc, and Uril doesnât really need pro color because of the hexproof.

I hope this helps. Look over my build and maybe thatâll give some more ideas.

Maybe some enchantress effects could help get some additional card advantage since you're already running so many enchantments? (i.e. Enchantress's Presence or Setessan Champion)

I love the idea of enchantment-decks! I would recommend adding more copies of Enchantress's Presence and suggest including Herald of the Pantheon or other enchantments that synergize like All That Glitters or Ethereal Armor :)

If you are going to run Argothian Enchantress I would add it a lot more enchantments. right now you have 10 spells that will trigger it, making it a very unreliable card draw source. Same with Enchantress's Presence.

Keep in mind that Chord of Calling and Green Sun's Zenith can't really search for any of your Hydras with x in it's cost because you wouldn't be paying the x in the creatures cost, making them 0/0's when they enter the field.

It's a nice start, and look forward to seeing you develop your deck building skills