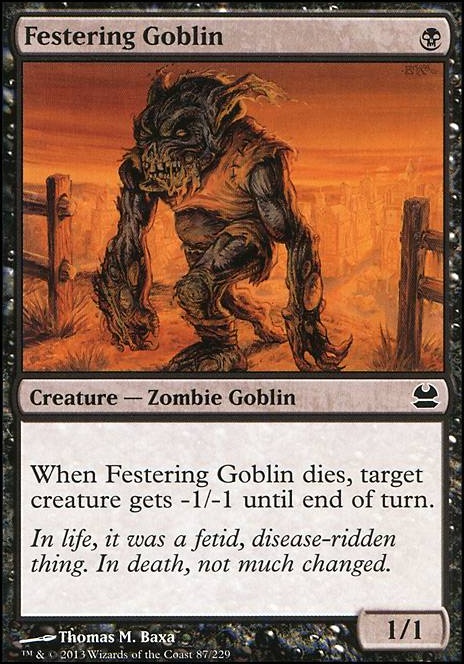 When Festering Goblin is put into a graveyard from play, target creature gets -1/-1 until end of turn. 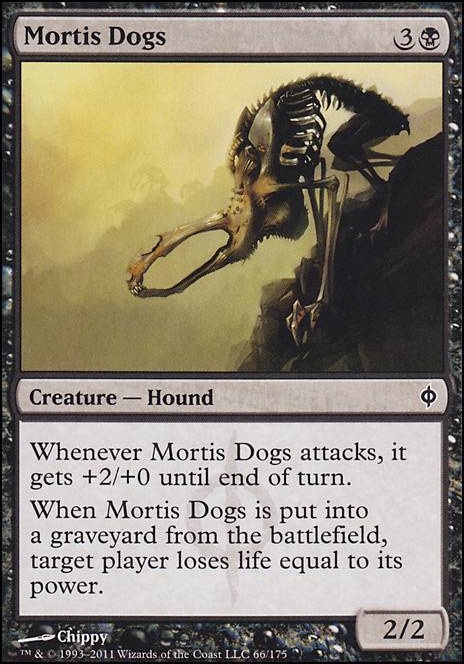 Under the Misty Mountains (Moria Theme)

Festering Goblin has an okay death effect too

Putrid Goblin wouldnât be too bad

There is a difference between a creature getting -1/-1 and getting a -1/-1 counter. Ascendant Evincar and Festering Goblin don't interact with Obelisk Spider.

Fun! Minor suggestion, Festering Mummy instead of Festering Goblin? It's nearly the same card, but just -1/-1 counters instead of till end of turn. And it's dirt cheap!

I would cut Festering Goblin, it is just really bad and instead make use of another zombie lord Death Baron being the best but stupidly expensive and then Metallic Mimic, Cemetery Reaper, Risen Executioner, Lord of the Undead, and Undead Warchief all also being options. I would also look into Vengeful Pharaoh for some incidental removal.

As for sideboard it is first necessary to evaluate the decks you face before making the sideboard.

This deck looks dope AF. I fucking love madcap skills and I'm sure you will too. Would recommend a few changes:1) I would definitely tidy up the mana a bit, run some nonbasics 2) Thrill-Kill Assassin is an uncommon, maybe run something like Ravenous Rats to go with the discard theme or Festering Goblin or Goblin Arsonist to go with the sacrifice theme 3) opinions on Reckless Charge?

I'd replace Festering Goblin or Festering Mummy with Bond Beetle as I find it hard to justify playing cards that give -1/-1 until end of turn on opponent creature unless there's some specific benifit.

Why aren't you playing Bontu the Glorified? He was made for decks like this.

Brindle Boar for some quick lifegain.

And then there's creatures with undying and unearth that are easily brought back for a second sacrifice.

Ever thought about running Awakening Zone or From Beyond? You could use the Eldrazi spawns/scions as mana ramp or chump blockers or sacrificial minions as long as you have an outlet.

I have a casual deck titled Suicidal Thoughts that focuses on sacrificing. Check it out if you're interested.