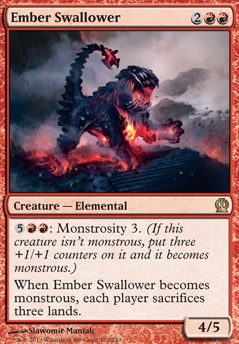 Show
You (Neheb) are a T-800 (Bolas Systems Model 101) Lazotep organism formed from a minotaur mold. You are to bring the end-times to these lands. Destroy all so a new age of lazotep can begin!

Show
In case of emergency, clear board with one of your non-land nukes.

After some playtesting i take it back. That shit is intense! I do have some suggestions tho. In my opinion you should skip the Emrakul and Colossus and run a couple of Deus of Calamity too keep you ahead after cascading. Maybe even find some room for an Ember Swallower or two.

There are some inclusions in the deck that I don't completely understand and seem like bad cards to be playing, especially in a format as crazy as commander. Why are you playing Scapeshift but not the Valakut, the Molten Pinnacle + Prismatic Omen combo? I understand it's a good way to get a bunch of landfall triggers, but you would be much better off with Life from the Loam in this slot. LftL is an auto-include in any lands-themed deck and you should be playing it. Army Ants seems way too cute and a very bad card for the political climate of a commander game. You can only take out one land every turn cycle, and the person you hurt will be salty with you. Since you seem to be going with an MLD theme, I would run Jokulhaups instead. Dragonmaster Outcast is way to slow and fragile. Cut it for Splendid Reclamation. Elvish Rejuvenator is just a bad Wood Elves. Ember Swallower is a bad card. cut it for better MLD. Same goes with Invader Parasite - it's a cute card, but doesn't make nearly enough of an impact for commander. Scute Mob - see dragonmaster outcast. I reccomend cutting it for Deathrite Shaman. Exsanguinate seems bad without Cabal Coffers+Urborg, Tomb of Yawgmoth or Vault Skirge+The Gitrog Monster. I would cut two basics for the aforementioned lands and Invader Parasite for Vault Skirge. Rites of Spring - I understand that this card is in here to work with your commander, but it's a bad card. Cut for Squandered Resources which also works well with Exsanguinate. Tsunami and Choke - is there a mono-blue player in your playgroup? If not these are just bad cards as a lot of the lands people will be playing, even in a two-color deck, are not islands. Path of Discovery seems like a bad card to me - I haven't actually played with it and I understand it works well with angry omnath, landfall dragon and avenger but if you don't have those cards it feels awful. Why is Conjurer's Closet in your deck. Unless you have one of your ~6 ETB creatures it sucks. Cut for Kodama's Reach. I would play Constant Mists over Eternity Vessel. Hope this helps!

I have a Mina and Denn, Wildborn deck (not on tappedout) that ramps into mass land sacrifice, big dumb idiots with land related abilities, and big dumb idiots that cause people to sacrifice (i.e. original eldrazi). The type of ld I use is Wildfire, Ember Swallower, and Destructive Force. With lots of ramp and draw, I always get to a couple of ld before the game is over, and with ways to get multiple lands from your graveyard each turn it becomes a game of attrition that you are likely to win.